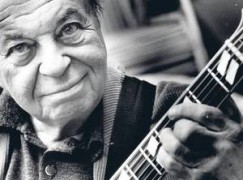 Coco, the jazzman from Auschwitz

Our partners at Ullstein have been following one of the great survivors:
Heinz Jakob „ Coco“ Schumann – is a German Jazz musician who survived the Holocaust. He was born at May 14, 1924 in Berlin. He was the son of a Christian father and a Jewish mother. Coco Schumann stayed in Berlin for the first 10 years of Nazi rule. He refused to wear a yellow star and to limit his activities to those deemed suitable by the Nazis. Coco Schumann made a name for himself in Berlin’s underground jazz scene. In 1943 he was arrested by the Gestapo and deported to the concentration camps – Theresienstadt, Auschwitz, Dachau. At the camp Theresienstadt he had begun playing in a band known informally as “The Ghetto Swingers.” Following his transfer to Auschwitz in September 1944, he played songs such as “La Paloma” for the German guards during an approximately five-month stay in the camp, while they murdered thousands of innocent Jews, ethnic Poles, Roma, gays and others.

Schumann was saved from the gas chambers of Auschwitz because a guard who was charged with sorting out new arrivals recognized him from Berlin’s jazz scene and placed him in a Roma musical group.

In the 1990s he has founded the “Coco Schumann Quartett“ playing Swing and Jazz. He is living in Berlin.

« Forget salaries. This is what arts chiefs take home in Boston…

The man who mistook his wife for a hat… no more »