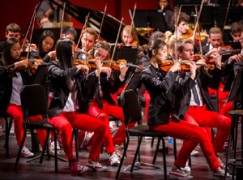 The National Youth Orchestra of the United States of America, founded by Carnegie Hall, is heading to China this summer. Dutoit conducts. Players to be announced in March.

(January 7, 2015; NEW YORK, NY)—Carnegie Hall today announced details for an extensive tour to China by the National Youth Orchestra of the United States of America (NYO-USA) in July 2015. This remarkable ensemble, created by Carnegie Hall’s Weill Music Institute, annually brings together some of the most talented young musicians from across the United States, ages 16-19, offering them an opportunity to train at the highest level with some of the world’s greatest artists while also serving as cultural ambassadors for their country, connecting with people around the world through their passion for music.

The orchestra will perform nine concerts in the US and abroad from July 10–26, visiting many of China’s greatest concerts halls in several different regions of the country, including the National Centre for the Performing Arts in China’s capital city, Beijing. This historic first visit to Asia by NYO-USA follows acclaimed inaugural year performances in Washington DC, Moscow, St. Petersburg, and London in 2013 and a coast-to-coast US tour in 2014.

The 2015 NYO-USA China tour schedule is as follows:

Celebrated conductor Charles Dutoit, Conductor Laureate of The Philadelphia Orchestra and Artistic Director of London’s Royal Philharmonic Orchestra, leads NYO-USA this summer, joined by internationally-renowned pianist YUNDI as guest soloist. The orchestra’s 2015 concert program to be performed at all tour venues will include the premiere of a new work from award-winning Chinese composer Tan Dun, commissioned by Carnegie Hall especially for NYO-USA as well as Beethoven’s Piano Concerto No. 5 (“Emperor”) with YUNDI; and Berlioz’s Symphonie fantastique.

« Now IMG Artists rips off its own agents

What shall I wear? A concertmaster recommends… »