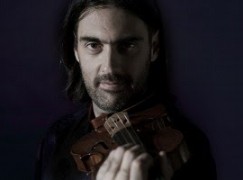 The Greek violinist Leonidas Kavakos is pursuing legal action against a specialist dealer in Burbank, Cal., who broke his bow, valued at $80,000.

According to court papers, Kavakos, 47, ‘65,000 euros for an 1850 J. Henry bow in August 2012, “ornately adorned with tortoise shell and silver.”  He says he brought it to Gevorkian Nazareth Violins in January 2013 to find out why the bow was curved. Gevorkian “began applying pressure to the Henry Bow, at which time the Henry Bow snapped into two pieces.

‘Kavakos says Gevorkian should have heated up the bow first, to make it responsive to straightening, but he did not. He says the bow is broken beyond repair. He seeks $80,000, and damages for negligence and breach of contract.’