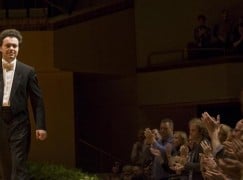 Just in, from Clive Gillinson.

Perspectives: Evgeny Kissin, Sir Simon Rattle, and Rosanne Cash
Evgeny Kissin celebrates 25 years since his Carnegie Hall debut with six concerts, including performances in opening and closing weeks of the season with the
New York Philharmonic and The MET Orchestra

Row brews in the US over an ‘anti-semitic’ composer »