Last time the Berlin Phil voted for a chief conductor, Daniel lost out to the young lion. He bears no grudges. In today’s Morgenpost, he writes a lengthy and affectionate 60th birthday greeting. Full article here (auf Deutsch). Extract below. 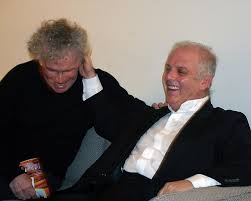 He is a friend. Sometimes we don’t see each other for months. Then we meet and it feels like yesterday. It is a friendship which does not need frequency. On Monday, Simon Rattle celebrates a birthday. Last time, I called and congratulated him. I’m twelve years older than him and I joked at the time: Simon, enjoy the 50, I can tell you one thing, 50 is better than 60. This time, I’ll tell him: Enjoy the 60, but 70 is even better.

I first experienced Simon Rattle when he was 19, playing timpani in the English (National) Youth Orchestra. It was a performance of Stravinsky’s “Rite of Spring” under the baton of Pierre Boulez. We did not speak at that time. I met Simon in 1978 in Orange. During the festival, the Roman Theatre, Saint-Saens’ opera “Samson et Dalila” with Placido Domingo. Simon was on a private visit. That was the beginning. When we meet now, we have so much to talk about. We talk about Berlin, about England, about the Middle East. Simon has always been very interested in the West-East Diwan Orchestra. Of course, we talk about music, sometimes just about food.

US protesters give Gergiev a break »