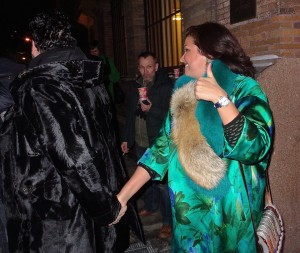 A report from Adrian Bruttan, one of the protestors:

If there was still any lingering doubt about her total awareness of what she has been doing, look at this picture taken outside the stage entrance of Carnegie Hall following Gergiev’s concert yesterday. We faced her and confronted her, she saw our posters of the dead swan and rivers of Ukrainian blood, she heard what we were saying – and her only response was a laughing smirk and mock salute. (Her girlfriends in her entourage were less subtle, turning to flip us the finger on several occasions. How anyone could treat the human tragedy and thousands of deaths by just showing the finger is incomprehensible.)

Regarding the concert itself, the Mariinsky Orchestra played in an unremarkably bland manner. The Shostakovich 4th Symphony, which is a bit of a stylistic hodgepodge, got a reading that sounded like the instrumentalists were just going through the motions.

« The man who mistook his wife for a hat… no more

An American heroine sings out for the homeless »