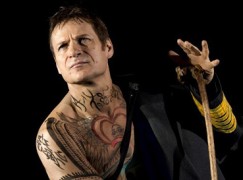 Last night’s opening of Pierre Audi’s production of Verdi’s Rigoletto was marred by the illness of Simon Keenlyside. The baritone had been unwell at the general rehearsal but agreed to brave the opening. Unwisely, as it turned out.

He sounded challenged in the first act. In the middle of the second act he was forced to leave the stage. He returned, struggling to stay on stage until the next curtain. Some idiot in the audience began to boo*.

Before the finale, State Opera director came out to announced that Simon Keenlyside was unwell. An ensemble veteran, Paolo Rumetz (pictured below), sang the opera to its close.

We wish Simon a swift recovery.

*UPDATE: A production member adds: Minutes before the boo, the audience gave Simon the most rapturous applause after an amazingly intense cortigiani. When Meyer paid tribute to him in front of the curtain the audience erupted in a prolonged, intense applause.