The city is kicking out its foreign musicians. Andreas Scholl appeals for your help in stopping the eviction.

Basle is in the forefront of Europe’s expulsion culture. The rot must be stopped here.

We are terribly sad to hear from colleagues on the Telegraph of the passing, this morning, of Michael Kennedy, aged 88.

Michael was one of very few critics who was a journalist before he was a musician. He joined the Telegraph in Manchester at 15 in 1941, went off to have a great war in the Navy and served as the paper’s northern editor from 1960 to 1986. When the edition was hit by printers’ strikes, he produced the paper single-handedly from Manchester. He was a craftsman in all he did, as editor, writer, biographer and music critic.

His musical outlook was shaped by Sir John Barbirolli’s golden era at the Halle. Michael wrote excellent biographies of Mahler, Strauss, Elgar, Vaughan Williams, Walton, Britten, Adrian Boult and Barbirolli himself, as well as several Oxford reference works.  Passionate as he was about musicians, he never disguised the relativity of his feelings.

Privately, among friends, he placed Strauss above Mahler, VW above Britten and Barbirolli above all other conductors. He and I argued the relative merits of composers long and hard. Michael was always amenable to another point of view, but never to be swayed in his passions.

His writing was a model of clarity, sometimes dry but never dull. He learned much from Neville Cardus, including a devotion to cricket and a talent for friendship. Many musicians and writers will feel the poorer for his passing. We will not see his like again.

Our warmest sympathies to Joyce.

The hugely popular Canadian soprano Measha Brueggergosman has never had it easy. After emergency heart surgery in 2012, she managed to conceive twice, only to have her hopes dashed before term. Now she has announced in a local interview that she’s expecting again.

‘I know we’re living on borrowed time,’ says Measha. ‘I have lost two babies and nearly died myself at one point — there are no guarantees. The time you have is the time you have. I am really grateful and aware of how blessed I am.’

The whole classical community will be  praying for a happy outcome.

The composer in his flat on Mozhaiskoe shosse, 1957 (c)  DSCH Journal.

Eric Eatherly, vice president of the Chicago-based Silverman Group and a well-liked figure across the arts, died when his father’s car was involved in a crash on the road to Knoxville. His father, who was driving, is in critical condition.

Eric was 35. An injured dancer, his main account was the Joffrey Ballet. He also handled media for the Lyric Opera.

‘For most of us, the post-Nilsson generation,’ writes Barbara Moeller in Die Welt, ‘she has been the Isolde of our lives.’

On Sunday, Waltraud Meier bid farewell to the role in Berlin.

Meier, 58, was expelled from Bayreuth in 2000 after a falling out with Wolfgang Wagner. She has since sung the major Wagner roles on most of the world’s great stages. Her most frequent conductor as Isolde was Daniel Barenboim. 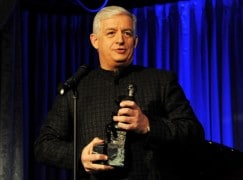 The Berlin Philharmonic has shown a fine set of figures for 2014.

Can any other orch match those stats?

The state had somehow failed to pay €3 million, promised in 2013. A further subsidy of 950,000 is guaranteed for the coming year, in a vague kind of way.

With 2014 ticking out, Italy’s culture minister Dario Franceschini at last came through with the cash so the orch can play on, for now.

Seems a funny way to run a sweet shop.