The first two are no surprise – the Benedicties of Mary and Andrea Bocelli.

The third is a bombshell.

The Guarnerius-playing Anne-Akiko Meyers, with Vivaldi’s Four Seasons and American Masters, outsold every genuine classical artist in America in the year 2014.

Local media report the abrupt dismissal of Enrique Carreón-Robledo after three years as music director of Opera in the Heights. Apparently, the board want a change of direction and … shorter operas.

On Tuesday evening, vice-chairman of the OH! board of directors Josh Abrams phoned Carreon-Robledo and told him … he was fired as artistic director. “My tenure with the company from April, 2011, lasted three years, nine months and six days,” he tells us. “During that tenure, I put my very best effort to do the highest quality job that I could possibly do. I invested my heart and soul, all of my abilities to the company and it is devastating to have come to this conclusion.”

David Peralta Alegre, principal second violin of the Netherlands Philharmonic Orchestra, has a burgeoning sideline as a social media consultant.

In a blogpost today, he extols two orchestra for having invested more in social media management than the rest.

You will have to click on David’s page here to discover who they are. However, impressive as these statistics may appear, we don’t think from our observations that these two orchestras are necessarily the most effective operators on social media. No-one has yet made orchestras a talking point on reddit. What we’re seeing here are the stats of passive fandom. How to make them active is the unanswered question.

Mandy Rice-Davies, whose early notoriety was the fulcrum of a recent ALW flop, has died of cancer, aged 70.  A sometime nightclub singer, she is remembered chiefly for the courtroom catch-phrase, ‘He would, wouldn’t he?’

Nancy Drye, a player in the University of Pennsylvania Orchestra, had her viola stolen from her home in Powelton earlier this month. She treasured the instrument, which she thinks dates from Paris around the time of the French Revolution.

Its remains were found Wednesday night on a vacant lot in west Philadelphia.

‘It feels like a death in the family,’ says Nancy.

He will be amused at sharing the award with George Harrison, the Bee Gees, country duo the Louvin Brothers, hard bop saxophonist Wayne Shorter and Texas Tejano musician Flaceo Jiménez.

The award was announced last night.

Boulez, 89, is thought to be too frail to fly to Los Angeles for the awards ceremony.

(So we’ll never get that shot of PB with a BeeGee). 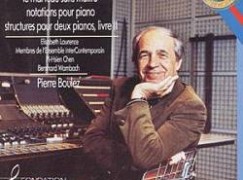 Riccardo Muti wrote to him last night: ‘Dear Maestro, dear Pierre: The news that you are the recipient of the 2015 Grammy Lifetime Achievement Award makes me and the entire Chicago Symphony Orchestra family extremely happy and proud. You are a giant in the musical world, and we are all so grateful for your great contribution to music. Congratulations with great admiration, affection and friendship.’

Paul was hired at 18 by Pierre Monteux and caught the ear in his first season with the tricky solos in the brand-new Shostakovich Sixth. He knew all about orchestral life from his father, who played oboe under Toscanini in the NBC Symphony and came west when the orch was disbanded.