Len Blavatnik, owner of the Warner Music Group, is about to dosh out $100,000 a year on new classical talent.

According to WQXR’s Brian Wise, who got first sight of the press release, Blavatnik will give the money ‘to an instrumentalist or singer between 18- and 35-years-old who shows strong career potential’. Sixteen candidates have been selected from the current Carnegie Hall roster. 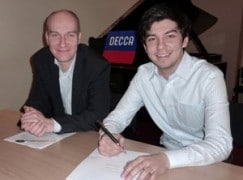 « Coffee was brought to Europe by Armenians. Discuss.