Our friends at Resmusica tell us that the Royal philharmonic orchestra of Liège has a new general manager. His name is Daniel Weissmann and his prior experience is with two rather provincial orchestras in France.

But that was no drawback. According to official sources, what got him the job was »ses qualités professionnelles évidemment, sa disponibilité rapide, sa volonté de s’installer durablement à Liège, et les conditions financières de son engagement. »

In plain English: his obvious professional qualities, his rapid availability, his readiness to settle long-term in Liège and his financial terms.

In even plainer English: he’s cheap.

At yesterday’s Berlin performance of Beethoven’s ninth symphony the audience, both within the Philharmonie and on live stream, became aware of a disturbance in the second violin section. A player fainted in the back row and was removed.

The orchestra has since assured viewers on Twitter and other media that the stricken musician is on the way to recovery. We have withheld her identity.

Guardian editor Alan Rusbridger observed the events in the hall:

A few minutes into the ethereal slow movement I saw a bloke approaching the stage and beginning to clamber up. What on earth could he be protesting about with Beethoven 9 on this night of all nights? Then I noticed a violinist slumped lifeless in her chair. Together the bloke and the other violinist on the back desk managed to reach her before she fell.

The orchestra played on. If Rattle noticed, he gave no sign.

A few minutes our hero returned and resumed his seat. Within a minute he was on his feet again. A member of the audience behind him had gone down. Once again he carried the dead weight out of the hall – this one face down. Once again people in the audience – the Berlin crowd is obviously well-qualified, medically – rushed out.

A few minutes later our hero was back in his seat. Later a second member of the audience went down – too far away for the hero to act.

At the end of the performance Rattle headed straight to the back desk of the second violins to comfort the shocked colleague.

MOSCOW, November 10 (RIA Novosti) – Sputnik, a major new media brand with modern multimedia centers in dozens of countries, will go live November 10. All of Sputnik’s multimedia centers located in major world capitals will maintain their own websites and broadcast from local radio stations. In 2015, Sputnik will broadcast in 30 languages, with over 800 hours of radio programming a day, covering over 130 cities and 34 countries. Sputnik’s exclusive content is designed for a global audience of billions who are tired of aggressive propaganda promoting a unipolar world and want a different perspective. The flagship site is www.sputniknews.com.

SPUTNIK FOR THE WORLD
Offering a fuller picture of the world with a truly diverse range of views, Sputnik tells the untold.
“There are countries that impose their will on both the West and East,” Director General of Rossiya Segodnya International Information Agency Dmitry Kiselev said. “Wherever they intervene, bloodshed, civil wars and color revolutions ensue. Entire countries fall apart. Iraq, Libya, Georgia, Ukraine, Syria, to name just a few. Many people already understand that the world doesn’t necessarily have to believe that the actions of the United States work for everybody. Russia proposes a model for the world that is based on respect for all of humanity. We believe in a diverse, multicultural world, and we have many allies. To promote this outlook our media group is launching a new global brand, Sputnik.”
Sputnik points the way to a multipolar world that respects every country’s national interests, culture, history and traditions.
“In this world, Japan is Japanese, Turkey is Turkish, China is Chinese and Russia is Russian,” Kiselev said. “We are not suggesting that other nations should adopt the Russian way of life. We believe everyone is entitled to live in their own way. Our outlook on the world is rooted in international law. The ongoing evolution of international relations is good for us and good for humankind. We are not an opposition media outlet in the countries where we operate. We maintain good relations with everybody.”

Renee Fleming has posted this picture of herself with Klaus Florian Vogt, Elina Garanča, Chancellor Angela Merkel, and Rene Pape after Beethoven 9th on all fall day with Daniel Barenboim and the Staatskapelle Berlin.

There is no recording of Handel’s Messiah that I can recommend without hesitation. The big-bang old band style just won;t wash these days and many of the period-instrument performances are just too… earnest.

So when a Messiah landed on my deck with just the right tempo and a bit of flesh on its bones, I had little hesitation in picking it as Album of the Week on sinfinimusic.com… or of crowning it the first of its century. 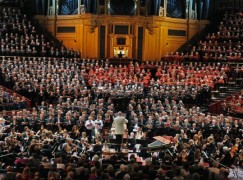 Salah Salahadyn, 42, was sentenced today for the theft of a violin from Frank Almond, concertmaster of the Milwaukee Symphony Orchestra, who was attacked with a stun gun in the assault. The violin, valued at $5m, was missing for nine days.

His accomplice has already gone to jail.

We have been alerted to the true results:
1st prize Yang Liu, a student of Yocheved Kaplinsky (Jury chair),

Like televised wrestling, is anyone fooled by the results of these phony contests?

The tenor has been talking about changing sopranos in Hans Neuenfels’ new production of Manon Lescaut in Munich. The chemistry between the director and soprano was, he says, all wrong. Not everyone is going to love this production:

In a mark of the worsening Cold War, Valery Gergiev has been told he is not welcome at next year’s Saar music festival, which has Poland as its theme. ‘We were given a clear indication by the Polish Embassy in Berlin that Gergiev is not wanted,” said its artistic director Robert Leonardy. ‘It is not acceptable that a Russian, a well-known friend of Putin’s, should appear at a Polish event.’

Gergiev was due to perform in Saarbrücken on March 10, on tour with the Munich Philharmonic and cellist Sol Gabetta. They will give the same concert in Paris the night before, but the Munich Phil has been told to change conductor for the Saar Festival. Gergiev will be replaced by th Polish conductor, Michal Nesterowicz.

The cancellation is a mark of Gergiev’s increasing isolation.

The international voice coach Mikhail Hallak has sent us this tribute to the late Kate de Marcken, whose body was found last week in a German forest. Her husband, a principal cellist in the Beethoven Orchestra in Bonn, has been arrested in connection with her murder.

I would love to thank all my friends for the genuine and kind words of support and share a few things about my friend Kate, whose life was taken much too early. I want to remember her for all she was, not just the last gruesome details we are slowly learning about.

I will always remember a beautiful Brahms second, with this beautiful boomy sound, a stunning Gaspard de la nuit and some electrifying Petrushka! She was not only an incredibly talented pianist, she was a profoundly human musician. She was quick (“vive” as we say in French) on all fronts and her wit and legendary.

We met during my years at the Brussels conservatory, she was already done and launching as a concert pianist. We all looked at music with this deep fire from within and always connected. When at some point in my life, the floor went away from under me, it was her arms I saw holding me for as long as it took. She never counted or calculated, she was always open hearted and generous. Many people have encountered her light and the ones that did not were simply unlucky.

I know I am better for having had the chance of meeting her.

I am ceaselessly thinking of a beautiful son, her entire family and friends. Her departure hurts so deeply, but I am so happy and privileged to have known her.
Kate, you were a treasure and I thank thee!

Around 20 musicians from the Primorsky State Opera and Ballet were rushed to hospital after eating dinner yesterday in their Moscow hotel, according to music sources.

The outbreak of food poisoning occurred hours before the ensemble began a three-day residency in the capital. They somehow gave a depleted first performance last night at the great hall of the Tchaikovsky Conservatoire.

We hear that Sonya Yoncheva has walked out on the Swiss agency Ariosi to join Judith Neuhoff at Universal in Berlin.

Diana Damrau, by reverse, has left  Neuhoff to join Ariosi.