The diva, 81, has done a deal with the Spanish taxman to settle a tax evasion charge. It’s costing her half a million Euros in fines alone, but she gets to sleep in her own bed. Full report here. Apparently, they’re going after Rafa Nadal next. 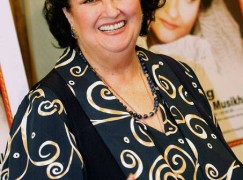 The Mariinsky Opera has announced the death of Victor Chernomortsev, one of its leading baritones.

Born in Krasnodar, he joined the Kuibyshev Opera in 1974 and was headhunted by the Vienna State Opera in 1992. Two years later he joined Gergiev’s ensemble, making his debut as Scarpia in Tosca. He was a formidable Alberich in Wagner’s Ring and a first-choice Verdi Falstaff.

Portrait of the composer Alexander Skryabin has appeared on House on Bolshaya Nikitskaya Street in the framework of the project “heritage” of the Department of culture of Moscow.

Pentatone, the boutique Dutch label, think we might be able to hear on  multi-channel Super Audio CD all the directional stuff that got lost in the grey old world of four speakers and a cat.

They’ve reissued some prime DGs of those distant days. Press release below.

The seeds were already planted in the early 1970s, when Deutsche Grammophon realised what amazing results could be achieved with quadraphonic tapes. But it was not meant to be – back then –, as imperfections in the playback equipment of the day made it impossible for musical connoisseurs to enjoy these recordings in the way artists, producers, engineers and others who had created them intended – the new recording technology was clearly way ahead of its time.

In re-recording and re-mastering these multi-channel tapes – most of which had not left their boxes for 30 years ­­– it was possible to involve the original recording engineers, as well as to use the original testing and tuning tapes, in order precisely to tune the analogue reproduction machines used. And the analogue machines were directly connected to state-of-the-art DSD analogue-to-digital converters, without the intervention of any mixing consoles and/or other special equipment which could have influenced the sound.

In other chamber news, the Aviv Quartet in its 19th season has replaced Timur Yakubov with Noémie Bialobroda as its new violist.

And the Rubens Quartet in Holland has chosen the British violinist Giles Francis in place of Tali Goldberg, who is returning to Israel.

Lots of Israelis on the chamber train, apparently.

Waddaya know? He got less in tips than Joshua Bell, but some of the reactions were more interesting.

Police in Bonn have allowed media to name the pianist whose body was found in a shallow forest grave not far from Bonn.

She was Kate de Marcken, 50, an American-born pianist who grew up in Belgium and was married to a player in the Beethoven Orchestra.

Her husband, unnamed, has been arrested and charged with her murder. When he first reported her missing, he claimed she had gone to visit her family in Liège.

Kate was a vocal coach at La Monnaie, Bonn Opera and Salzburg. She assisted at the world premiere of Peter Eotvos’s opera, Three Sisters, among other productions. She accompanied visiting singers in Bonn recitals.

A friend describes her to Slipped Disc as ‘the kindest human being’. The last time they spoke she had asked for his assistance in relocating to New York.

The music community in Bonn are in a state of shock at this appalling tragedy.

A woman named by police as ‘Katherine M’, was reported missing in Pittersdorf, near Bonn, two weeks ago.

Her body was found yesterday afternoon, buried in a forest along the river Ahr, near Dümpelfeld. Her husband reportedly led the police to the site and is being treated as the murder suspect. He has been brought before a court for a holding warrant and is thought to be a classical musician.

The couple reportedly had a 12 year-old son. Katherine was listed as a soloist with the Beethoven Orchestra of Bonn.

Professor Robert Eschbach has come up with a fascinating tale from the mists of gramophone history.

A student of Sam Franko and Joseph Joachim, Dora Valesca Becker (1870-1958) was born in Galveston, Texas and became the first female violinist on record (1898). In the first year of recorded violin playing, she cut fourteen cylinders for the Bettini label, five years before Joachim made his own iconic recordings for Gramophone and Typewriter. You can hear her here:

In an 1895 article on “American Girls as Violinists” in the Ladies’ Home Journal we read that Dora’s mother “had, as a child, the greatest craving to study the violin, but her wish was never realized, because her father, a wealthy Hungarian merchant, was opposed to the idea of having a girl educated in music. Mrs. Becker was therefore determined, should she be blessed with a daughter, to have her learn the violin. So it came about that the little Dora began her studies when only six years of age.”

Dora made her début at Steinway Hall in New York when she was ten years old. When she was fourteen, she played over a hundred concerts. At sixteen, she sailed for Europe. In 1889, she was awarded the coveted Felix Mendelssohn scholarship to study with Joseph Joachim at the Berlin Hochschule. (Over the years, that award was also given to such talents as Marie Soldat, Ethel Smyth, Gabriele Wietrowetz, Karl Klingler (Suzuki’s teacher), Otto Klemperer, Wilhelm Kempff, Kurt Weill, Max Rostal, Arthur Balsam and Roman Totenberg.) She made her German debut as a soloist with the Berlin Philharmonic, and returned to New York, where she founded the New York Ladies’ Trio, and appeared in concerti with conductors Theodore Thomas and Anton Seidl. She was the first to play Bruch’s Scottish Fantasy in America.

Dora Valesca Becker gave at least one last performance. In 1908, she gave a well-received recital in New York’s Mendelssohn Hall, performing the Saint-Saëns Concerto in B minor, some shorter works, and giving the American premiere of a Reger sonata for violin alone.

Health warning: too much social media exposure in a week can make you short-sighted.

After the Manon Lescaut walkout, the diva has agreed to return for a pair of festival performance next summer as Tatyana in Eugene Onegin.

The singer she is replacing in that role is Kristine Opolais, who is depping for her in Manon Lescaut.

Anna Netrebko will give her Munich role debut as Tatyana in Tchaikovsky’s Eugene Onegin during the Munich Opera Festival 2015 and will take over the part from the originally scheduled Kristine Opolais.  Dates: 26th and 29th of July.General Manger Nikolaus Bachler on this unusual change of roles: “After Mrs. Netrebko’s withdrawaI from the premiere performances of Manon Lescaut, I am delighted to have her back on the season’s roster of artists, especially in Krzysztof Warlikowski’s daring and exciting take on Eugene Onegin.

You remember the torture-chamber picture we ran last week? Boston Symphony were putting cellists through the hoops for a vacant seat.

The winner (we hear) is Oliver Aldort, 21, a Curtis grad.

Trouble is, Oliver has also just won a Pittsburgh audition. So which is it going to be?