Gary Hanson, executive director of the Cleveland Orchestra, has told his board to search for a successor. He’s taking early retirement a year from now, after 11 years as chief and 28 with the orchestra.

Hanson, a Canadian, is one of the most thoughtful and resourceful managers on a depleted US scene. He has kept the orchestra afloat in a troubled city economy by establishing residencies in Miami and several European festivals. Cleveland is in good shape, but it will need to search high and wide for a visionary leader for the next decades. No obvious names spring to mind.

CLEVELAND  – Gary Hanson, Executive Director of The Cleveland Orchestra, has announced his plans to retire in October, 2015.  At the time of his retirement, Mr. Hanson will have served the institution for almost 28  years, with more than 11 years in his current position.

In making the announcement, Gary Hanson said, “Leading our extraordinary staff in the service of this great Orchestra is a true privilege.  I’m proud of our accomplishments together in a time of immense change and challenge for orchestras.  At the same time, I look forward to turning over the reins late next year to the next executive leader who can pursue ever-greater institutional achievements.”

Mr. Hanson continued: “It is an honor for me to share in the stewardship of  this remarkable Orchestra, which means so much to me, especially the opportunity to work side-by-side with Franz Welser-Möst, whose artistic and institutional impact is without peer in the world today.  Likewise, I have been fortunate to serve the dedicated and generous Board of the Musical Arts Association under three visionary Presidents, James D Ireland III, Richard J. Bogomolny, and for the past five years,  Dennis W. LaBarre.”

Commenting on Mr. Hanson’s forthcoming retirement, Music Director Franz Welser-Möst said: “I have enjoyed a great partnership and warm relationship with Gary for more than a decade.  For me, the highlights of his many achievements are the innovations which he has pursued with incredible energy, wisdom, and intelligence.  I look forward to our final year working together as we seek to evolve this great and storied institution to be ready for the future.”

Board President, Dennis LaBarre, noted that “Gary Hanson’s plan to retire at the end of his current contract follows our ongoing consideration of well-planned and orderly leadership transitions. I am very grateful that Gary is providing ample time for the Board to identify the next Executive Director and ensure a seamless succession. I also appreciate Gary’s ongoing tireless efforts on behalf of The Cleveland Orchestra and look forward to his continuing contributions to our progress over the coming year.”

Gary Hanson joined the Orchestra’s staff in 1988 as Director of Marketing and Public Relations, a post he held until 1997 when he was appointed Associate Executive Director.  In that role, Mr. Hanson led the renovations of Severance Hall and Blossom Music Center.  He began his tenure as Executive Director in early 2004, as the eighth individual to serve as the Orchestra’s senior executive since its founding.

Under his executive leadership,  The Cleveland Orchestra has earned a reputation for innovation based on new initiatives and programs, including its annual residency in Miami, the addition of staged opera and ballet to the season in Cleveland, and the development of the nation’s youngest audience for a symphony orchestra.   In partnership with Franz Welser-Möst, Mr. Hanson has led the expansion of the Orchestra’s international presence and the redoubling of its commitment to education and community engagement.

Mr. Hanson plans to retire in Cleveland where he will devote time as a volunteer with civic organizations in addition to consulting in the music industry.

The series will be repeated on BBC Radio 3 on successive Monday nights at 10pm:

The wild man of the opera stage has been fairly subdued of late. Aside from a brilliant speech at the Polar Prize, he has kept well below the radar.

He’s planning a dance event in New York and a residency at English National Opera early next year, but this hardly goes down as a limelight Sellars year – unless you count him as the hidden hand in the Met’s long-running Klinghoffer furore.

So why has Musical America today named Peter Sellars Artist of the Year?

The award is the more perplexing since it has always previously been given to a musician.

Nina Timofeeva, one of the mid-century stars of the Bolshoi Ballet, has died at the age of 79.

Originally from Leningrad (St Petersburg),Nina joined the Bolshoi in 1956 and built her career on Odette-Odile in Swan Lake.

Her late husband, the composer Kirill Molchanov (1922–1982) wrote music for some of her ballets.

In 1991 she left her post as a choreographer at the Bolshoi and migrated to Israel with her daughter, Nadya, also a ballet dancer.

More grim news from the Colon, in Buenos Aires.

On Friday, bits of plaster from ceiling fell into the orchestra pit. Only five cellists were persuaded to risk their lives in that night’s performance.

The musicians are holding daily demonstrations against bad personnel management and bad maintenance of the old building.

The doomed Danish National Chamber Orchestra has scored more views in five days than anything screened from Copenhagen since Borgen. It has appeared on all manner of joke sites and some serious. Most orchs would die to receive that attention.

But it seems that DR, the national broadcaster, is unmoved. Its bosses are determined to shut down the ensemble, world fame or not.

What more can the orchestra to make its case?

Contrary to yesterday’s ruminations, we’re delighted to learn that approval has been given for Franz Joseph Haydn to have a London blue plaque. Read here.

Answers, please, below the line. 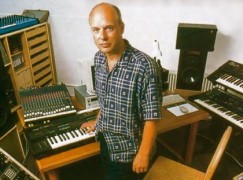 New York – On December 11, Christie’s is honored to offer an American cultural icon, ‘The Ricketts’ Apple-1 Personal Computer, as part of the auction house’s inaugural Exceptional Salein New York, taking place December 11 at Rockefeller Center. Named after its first owner Charles Ricketts, this example is the only known surviving Apple-1 documented to have been sold directly by Steve Jobs to an individual from his parents’ garage. It is estimated at $400,000 – 600,000, the highest estimate yet for an original Apple-1 offered at auction.

23 years after Ricketts bought the Apple-1 from Jobs in Los Altos, it was acquired by Bruce Waldack, a freshly minted entrepreneur who’d just sold his company DigitalNation. The Ricketts Apple-1 was auctioned at a sheriff’s sale of Waldack’s property at a self-storage facility in Virginia in 2004, and won by the present consigner, the American collector, Bob Luther.

On November 4, 1964 San Francisco heard the world premiere of Terry Riley’s In C, a work that repeats a single note, relieved by an F-sharp. The first performance, with the composer’s participation, came to be regarded as the birth of minimalism.

In C consists of 53 musical phrases, lasting from half a beat to 32 beats; it is intended for any number of performers (though 35 is considered ideal) and can last any amount of time.

Alfred Frankenstein wrote in the San Francisco Chronicle: ‘It is formidably repetitious, but the harmonic changes are slowly introduced into it; there are melodic variations and contrasts of rhythm within a framework of relentless continuity, and climaxes of great sonority and high complexity appear and are dissolved in the endlessness. At times you feel you have never done anything all your life long but listen to this music and as if that is all there is or ever will be, but it is altogether absorbing, exciting, and moving, too.’ (h/t: Tim Page).

They have been together for 38 years. In fact, they have hardly ever been seen apart.

The wedding was held at the home of former San Francisco Symphony board President Nancy Bechtle.

MTT turns 70 next month, Josh is 68. Full life chronicles here. We send them all good wishes.