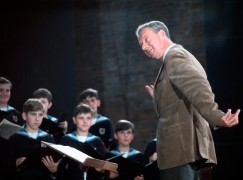 Dr Michael Petch, a member of Britten’s medical team after his 1973 heart operation, has written in the Journal of the Royal Society of Medicine that syphilis was ‘very much in the minds’ of his clinicians and that ‘we found no evidence’.

Paul Kildea, the official Britten-Pears Foundation biographer, continues to maintain his preposterous claim that Britten had the clap and his surgeon hushed it up to save his reputation – though not his life.

‘I worked hard and carefully to uncover the cause of Britten’s deterioration and ultimately found the witnesses and evidence that led me to my conclusions more plausible than the assertions that have subsequently appeared to try to counter them,’ he writes. Read here.

« Ivry in his element