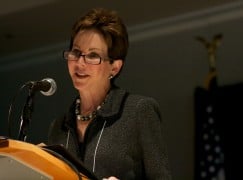 ASO president Stanley Romanstein’s attempt to impose cuts by locking out his musicians has begun to fail.

Hours after he announced that concerts were cancelled until November, a member of his board, Ron Antinori, made public his resignation, saying the musicians should never have been shut out.

Romanstein has now quietly proposed that both sides should meet a federal negotiator to find a way forward.

The mediator will be Allison Beck, deputy director of the Federal Mediation and Conciliation Service, who last month saved Peter Gelb’s skin at the Metropolitan Opera by giving away key executive powers in exchange for small wage cuts.

The Atlanta musicians have agreed to meet her.