The circumstances of Stanley Romanstein’s departure are becoming clearer by the minute.

Sources close to the dispute tell Slipped Disc that he was fired a week ago after the board perceived his weakness. Why he was allowed to hang around is uncertain, perhaps a sign of divisions within the board. More heads may yet have to roll.

Either way, the heat is now on the board and on the controlling Woodruff Arts Center, whose president, Vrginia Hepner, needs to explain why she diverted millions in funds away from the struggling orchestra.

At issue now is  question of will. Does Atlanta want a front-rank orchestra? If so, it needs to invest in extra musicians and qualified management. No more half-baked doctors of irrelevance from a low-budget sidelie. Atlanta, like Minnesota before it, must call in a tried-and-tested administrator to make peace and start over.

Stanley Romanstein, who engineered two lockouts of the musicians in as many years, has left the job in mid-lockout.

Romanstein said: ‘I believe that my continued leadership of the ASO would be an impediment to our reaching a new labor agreement with the ASO’s musicians.’

That may well be the case, but to walk out in the middle of a dispute exposes considerable weakness.

Romanstein will be replaced in the short term by Terry Neal, a retired Coca-Cola Company executive and current ASO Board member.

Romanstein came to Atlanta in 2010 from the Minnesota Humanities Center in St. Paul, replacing Allison Vulgamore, who left the ASO for Philadelphia with a mounting deficit in her wake.

A man of limitless vanity who flaunted his (unrelated) PhD on all emails, Romanstein was ordered by the board into successive confrontations with the musicians. Two years ago, he achieved a quick wage reduction. This time round, the musicians were supported by their conductors and public sentiment. The board have thrown ‘Dr Stanley’ to the wolves and must now try to dig themselves out of the hole they have dug.

The Woodruff Arts Center, which hosts and string-pulls the Atlanta Symphony Orchestra, is starting to feel the heat.

The WAC recently sold a piece of property for around two million dollars. But instead of responsibly applying the windfall towards repairing the orchestra’s finances, Virginia Hepner,WAC’s president and CEO, donated the cash to an organization called the Community Foundation for Greater Atlanta (CFGA).

The big-hearted Hepner (pictured) was a board member of this body before she was made prez of WAC. She did not disclose that link when making the inexplicable donation to a board of her old pals.

The musicians are fuming. They say:

This heart-stopping piece of testimony comes to us from the Mayor of London’s Music Fund.

The Mayor, Boris Johnson, dropped in to hear the group play.

The girl’s mother wrote later to the organisers, ‘saying what a fantastic experience (her daughter) had at the awards and workshop. She said that the day was made extra special as Boris came to visit and hear their performance. She thanked us from the bottom of her heart for the wonderful opportunity. On the way home (the little girl) turned to her mum and said: “Music makes me feel as if my Daddy is on my shoulders.”’

Don’t ever doubt the healing power of great music.

Statement just posted by Kathryn Enticott, who has flown the coop: 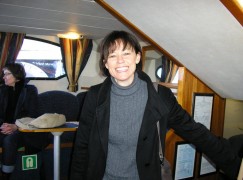 To avoid further speculation, I wanted to make my own announcement about my on-going relationship with IMG Artists and the start of my new company, Enticott Music Management.

I have worked for IMG Artists for many years – in fact, almost half my life – and I am extremely grateful that the shareholders and COO, Lorna Aizlewood, were willing to find a way for me to manage artists in association with IMGA while having more autonomy in the way I work that includes me being able to accept new projects and challenges. I want to make it clear that EMM will continue to work with IMGA exclusively on the management of Semyon Bychkov, Alan Gilbert (for Europe), Franz Welser-Most, Leif Ove Andsnes, Nikolaj Znaider and Milos Karadaglic and will also consult to IMGA on the management of other artists.

I have huge admiration for the team at IMGA. Some of the greatest managers in the business work for the company and the sense of team spirit we enjoy has been excellent . Change is challenging but my colleagues and friends will have nothing but my support as IMGA evolves over the coming months and years.

We understand that the music director, Mikko Franck, had a two-hour conversation over the weekend with the director general of Radio France. It appears there is a plan to merge two radio orchestra, the Philharmonique and the National.

Franck promptly withdrew from the forthcoming concerts. We are trying to clarify whether he has resigned altogether.

Either way, chaos is probably an understatement.

The diva’s in Paris and in love all over the place. Watch.

Media reports from the semi-autonomous Chinese province suggest the organisers of the democracy protest intended to foster a peaceful atmosphere by playing classical music outside the centres of power. In a previous protest, a cello was played as demonstrators had their heads ceremonially shaved.

Chan Kin-man, one of the organisers, believes in the power of music to melt hearts. Sadly, it did not work out that way. Report here.

Our mole in the box-office at English National Opera has collapsed with exhaustion.

The phones won’t stop ringing, the internet link’s in meltdown and the bank has been asking if the money is clean.

What has brought on this rush?

Not an opera, to be sure, but a stage musical that is now performed so regularly in opera houses that it may well be changing genre.

Be that as it may, for any single work to sell close to £1 million in an opera house less than a week must be some kind of world record.

There’s a new recording out of the Glagolitic Mass. It follows the composer’s final score of September 1927, before it got cleaned up by the maestro profession for civilised performance. This is Janáček’s godless Mass as he wanted it to sound, led by a conductor who likes it prickly.

It’s my Album of the Week on sinfinimusic.com. Click here to read more.

Our friend Philip Setzer, violinist of the Emerson Quartet, was one of the judges at the Indianapolis Competition, which was tainted by controversy over the high number of judges’ pupils among the finalists.

Phil had no students in the finalists line-up. Nor had he ever agreed to judge a competition before. Here’s his frank and open account of what he saw.

Hi Norman.
As far as Indy goes, I certainly understand your suspicion and how it looks from the outside.  I’ve been invited to sit on several juries in the past but never wanted to do it because I wasn’t sure how fair/political they were.  I decided to go to Indy because I know and trust Jaime Laredo completely and had heard nothing but good things about the way this competition was run and respected the rest of the jury for their knowledge and reputation of honesty.  I also wanted to do it in memory of Mr. Gingold, who taught me for 3 years when I was a young boy (I LOVED my lessons with him).  I think the process was as careful and honest as I could imagine.

I think it’s fine to question these competitions.  I don’t love them myself but they are set up to help young musicians get a career boost that they deserve, or at least something to work toward–a goal, if nothing else, at a time when young musicians perhaps need that. There are certainly other ways to build a successful career, but this competition is set up to help the new generation.  At a certain point, which I think we have reached, the questioning and difficult to support accusations only hurt the winners of the competition, not to mention the competition itself and the people who have worked so hard and contributed so much to enable it to exist at all.

I gave JinJoo Cho a very high score for her performance of the Korngold Concerto because she played it with great warmth and sincerity (and technical prowess).  Some parts of her  earlier rounds had some inconsistencies, but that was true for everyone and the points were tallied from the whole competition, so it really was an overview of each contestant.  She had something special that reached the jury and the audience.  I wish you could have heard her at the closing ceremony, playing the difficult Carmen Fantasy by Waxman, in a very dead acoustical space, literally facing the jury, who were sitting in the front row on the side directly in her line of vision, and in front of the 5 other finalists she had defeated.  I wish you could have seen the warmth she showed those 5 and their reciprocated support and happiness for her.  The jury all cheered her too and I know we were proud of her courage and felt good about our choice, her potential, her future.  I agree the pots need stirring in the music biz, but let’s not “throw out the baby with the bath water”.

Anyway, I wasn’t going to allow myself to get embroiled in this, but wanted to elaborate and give you a bit of the other, more positive side of things.  Hope this helps in some small way.  I am either an honest man or a fool–probably both!

P.S.  You are welcome to put this on the record as a respectful view from the other side.

There’s a rather good London ensemble with a little problem. They’ve been around for nine years and are just getting ready for anniversary liftoff. But some other group seems to have hijacked their name. What do you think they should do?