Visit NBCNews.com for breaking news, world news, and news about the economy

The top-selling classical album in the US last week (source: Nielsen Soundscan) is the flamboyant organist Cameron Carpenter, who was denied entry to Britain earlier this year.

The next best was Benjamin Grosvenor on Decca with 229.

That’s in the whole of the US market of 314 million people.

It’s the work of luthier Baltazar Monaca, of Trujillo, Venzuela.

We are delighted to publish these beautiful pictures from the August wedding of composer Jennifer Higdon to Cheryl Lawson. Conducting the ceremony is Baltimore music director Marin Alsop.

Cheryl and I have been together since high school (we met in band). She now runs my publishing company and works in the capacity of an agent, negotiating my travel and commissions. We’re thrilled that we were able to finally legally marry. And surprisingly, it DOES feel different!

We were in the middle of the Cabrillo Festival in Santa Cruz, California, so on a day off, we had the wedding. In California a person can become Deputy Commissioner of Civil Messages for 24 hours (with the right paperwork).

With our best/only man – Key! Cheryl’s saying, “I got the girl!”

We wish Jennifer and Cheryl a lifetime of happiness.

Pablo made his company debut in 2010 with Kurt Weill’s Rise and Fall of the City of Mahagonny with La Fura dels Baus, which was filmed for DVD and won the Diapason d’Or. He also led Daniel Catán’s Il Postino with Plácido Domingo in July 2013.

Pablo, 36 is is Principal Conductor of Orchestra of St. Luke’s; he returns to The Metropolitan Opera for Carmen this fall. 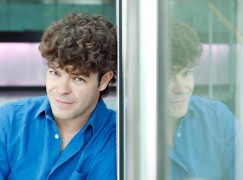 The Colorado Symphony, in a state that has legalised cannabis, was the first to announce pot concerts.

Now it’s taking two steps further to relaxing the atmosphere. Musicians will no longer wear tuxedos and alcoholic drinks can be brought into the hall.

(By anyone, except the musicians).

The Dutch say he did more than anyone to make the Holland Festival what it is today.

Jo Elsendoorn was press director and music programmer of the festival from 1951 to 1977.

A resistant to Nazi occupation, Jo spent three years in a concentration camp and lost his first wife during the war. Aside from the festival, he wrote successful children’s books.

In a move unprecedented in US orchestras, the music director and principal guest conductor of the Atlanta Symphony Orchestra have pitched into the attempt by ASO management to force through further job cuts, under threat of an imminent lockout. Robert Spano and Donald Runnicles leave no doubt as to where their commitment lies. Read their remarkable letter below.

To: The Atlanta Symphony Orchestra September 2, 2014
— The Board of Directors
— The Management
— The Musicians
Although it is neither our place nor our intent to involve ourselves directly in the collective bargaining process between musicians and management, we feel compelled to write this letter. Our doing so bears inherent risks as it may be construed as our taking sides in what again has proved to be a contentious process. We both feel bound by a sense of responsibility and deep commitment to represent and remind everyone what the ASO is all about: its high musical standards and aspirations. Indeed we are charged by contract to create and maintain it.

In the heat of the current negotiation we fear these standards might easily be forgotten or compromised. Our emotional commitment to the ASO and its potential is profound. This prompts us to speak out lest we fail in our duty to preserve the extraordinary legacy that has passed into our hands as temporary stewards. This is all the more poignant in that next season we celebrate the legacy of Robert Shaw. The ASO is a jewel, which should not be lost or compromised, and the current conditions threaten that loss.

This year’s contract negotiation repeats an unhealthy pattern of pitting musician and management positions as incompatible alternatives. The situation is not unique to Atlanta. There are positive examples to emulate but above all we must avoid the residue of discord and acrimony. The concept that stopping the music — whether characterized as lockout or strike — as a reasonable alternative is  unfathomable, deeply divisive, and would be a tragic mistake.

Two years ago, our musicians accepted huge concessions with an expectation that, in so doing, both board and management would be able to steer the organization out of financial distress. We ask the board and management to acknowledge the sacrifice the musicians have already made, and to examine other ways and areas to establish sustainability.

Sustainability must also be applied to a quality of the orchestra and the notion of excellence, not only to finances. There are artistic lines that cannot and must not be crossed. We must re-dedicate ourselves to the ASO’s founding principles of excellence and to the support of a full, robust, and world-class symphony orchestra. We need a long-term agreement. The very nature of how the ASO interacts with its community is
far better served without frequent interruptionof collective bargaining. Creative innovation itself requires time. Conception, investment, and experimentation take time to implement, and cannot be assessed instantly.

As we reflect on our long and deep relationship with this remarkable orchestra, it is our fervent hope that our words would be used only as a reminder of the common purpose we share: the purpose to which the board has generously and tirelessly devoted considerable energy and personal resource – and that same purpose to which the musicians dedicate their lives and livelihoods.
We are both deeply committed and deeply concerned.
ROBERT SPANO      DONALD RUNNICLES
Music Director       Principal Guest Conductor

The Danish jazz trumpeter Per Nielsen has advertised in the Neue Zürcher Zeitung for the return of his prized instrument.

He left it on the S 9 from Bonstetten to Zurich. Contact his website if you catch sight of it.

Ross Gunning, 19, is a student at the Royal Conservatoire of Scotland.

Two years ago, he founded the Glasgow Philharmonia.

Now he has been appointed conductor of the Glasgow Schools Symphony Orchestra – the first time the players have faced a maestro their own age.

We were first to report the close-season recruitment of Noah Bendix-Balgley from Pittsburgh as concertmaster and Florian Pichler, 18, as second trumpet.

What we missed was a third signing before the transfer deadline.

Michael Karg, 22, from Amberg, has joined the double-bass section.

(We still think they are light in midfield)