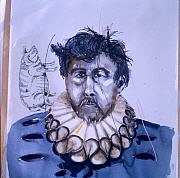 BBC4, the minority culture channel of the national broadcaster, is relaying a delayed Proms concert tonight.

Excluded from the broadcast is Sonance Severance 2000, a work by Sir Harrison Birtwistle, who is widely regarded as the country’s most original composer.

Why take it off TV? Because the controllers of television are terrified their viewers might switch off at the sound of something unusual.

They did it before with John McLeod and provoked widespread protests, to no avail.

Bring me the head of BBC4.

(If you’re in Britain, you can watch the Birtwistle piece on the BBC iplayer here).

UPDATE: Here’s a further outcry from Susanna Eastburn, head of the compossers’ organisation, Sound and Music.