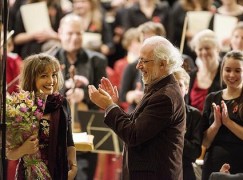 When we challenged the BBC last week over the absence of its own commissions from television relays of the Proms, what we got in response were overlong emails from hyper-anxious press officers, offering to ‘explain’ the corporation’s position, as well as a meeting with one of its supernumerary executives.

Lord, give us strength…

Now, however, Radio Times has joined us on the barricades

Radio Times stands in relation to the BBC as Pravda to the Kremlin, or Opera News (in the past) to the Met. It is a house organ.

So when a reviewer in Radio Times complains (below) about the elimination of new music from TV, it’s a sign all is not well at BBC Music under its new ‘inclusive’ leadership.

RT: A shame that BBC4 is omitting Roxanna Panufnik’s Three Paths to Peace. It doesn’t fit their masterwork package, but a thoughtful work by a British composer – both living and female (pictured) – demands a wider audience.