As Met deadline looms, could opera survive without a orchestra?

Today is the Met’s deadline for reaching a wage agreement with musicians, or locking them out.

Dr Gerald Stein, a Chicago psychotherapist and www.slippedisc.com contributor, is a passionate, lifelong concertgoer. He is involved with music and musicians in his community. But Dr Stein has some chilling fears about the replaceability of the orchestra in the immediate technological future.

We don’t share his conclusions, but the advance of robotic music needs to be addressed and the case for live music vigorously restated. Here’s Dr Stein’s sample scenario. Read the full text here. 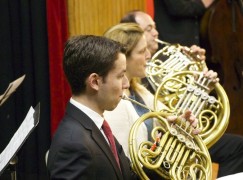 Imagine a generous donor purchasing loudspeakers, the computer, musical notation software, and the (automated Vienna Symphonic Library (one time expenses) for a small community with a decent auditorium, thus enabling staged operas. There exists a plethora of talented young singers and competent conductors of high school, college ensembles, and community orchestras. We are not talking James Levine or Riccardo Muti here, of course.

A digital orchestra reduces costs after the original outlay by our hypothetical donor. Goldstein’s long effort to enter the notes into the software for his “Ring cycle,” once done, needn’t be done again. Of course, he would have to be willing to sell his work product for an affordable price or simply give it away. Alternatively, several small communities could band together to pay whatever price Mr. Goldstein would set, or hire someone to do the job of entering the notes for an agreed upon opera. From that point, it could be widely and cheaply shared among them, as digital music commonly is today.

The cost of such an arrangement would be far less than hiring an orchestra and paying a major conductor tens of thousands of dollars per performance. Still, the result would be both poorer and different, at least until robots and androids are far more developed than they are now; replacements, that is, for some or all of the musicians!

Did I say robots and androids? The latter are robots designed to resemble humans. I’ll get to androids in a moment. Nonetheless, we are already in the world of the “second machine age.” Erik Brynjolfsson and Andrew McAfee, two MIT professors, elaborate in their book, The Second Machine Age: Work, Progress, and Prosperity in a Time of Brilliant Technologies.