The Scottish National Party say yes (but they say that to everything).

Ken Walton, music critic of The Scotsman, fears for the survival of one orch in particular.

A Norwegian duo, Nico and Vinz, are top of the UK pop charts.

The classical industry needs to take note. New acts sell. And they take time to develop.

Milos Karadaglic has the best-selling classical album in the US this week (Nielsen sales). His Aranjuez sold 575 copies, which is about average for a number 1.

The next best-selling record is Dvorak 8th symphony. It sold…. (we can hardly bear to share this)…. just 175 copies in the entire USA.

This just in from the rising crossover violinist, Charles Yang:

‘I am so so so thankful to be alive at this moment. My rental car was hit by a truck today while I was on my way to LA from San Francisco. I am so thankful for the people who stopped and helped, the paramedics the doctors etc. About to be discharged with no broken bones and I’m gonna play the best show of my life this Saturday. Thank you to whoever or whatever is keeping me alive and of course to you all, my family. I won’t letcha down .’

In the thick of writing a 2,000-word analysis of the great man’s words and music, ahead of his 80th birthday next month, I am poleaxed by the news that he’s about to release a new album. Surely he can’t go further than he has already been?

The beauty of Cohen is you never know until the work is there, and then it takes another 20 years to bed in.

Still, I think I have said something original about his hat (which has a Facebook page to itself).

Laurie Niles has conducted one of her extraordinarily revealing interviews. This one is with the great violinist Aaron Rosand and it explores, among other things, the differing physiques and techniques of outstanding performers.

Rosand himself had an early start. He played the Mendelssoohn concerto at 10 with the Chicago Symphony, found a rich patron (whom he shared with Isaac Stern) and set off on what promised to be a glittering career … 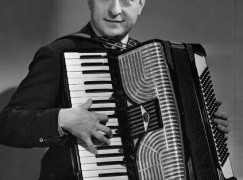 This is the Palestinian refugee camp of Yarmuk in the south of Damascus, which has been pounded to rubble by President Assad’s army for the start of the Syrian insurrection. There have been innumerable child deaths (no support rallies abroad), yet no shortage of hope.

Ayham al-Ahmed, 26, a resident of Damascus’ Yarmuk Palestinian refugee camp, plays the piano in the middle of the street  on June 26, 2014 (c) AFP Photo/Rami Al-Sayed). ‘I weighed 70 kilos between the siege, today I weigh 45,’ Ahmed told AFP. His favourite music is by Haydn.

UPDATE: What happened next.

Declassified papers of a KGB defector have named Steve Carl Stevenson, an Australian violinist of Bulgarian parentage, as a spy. Born in Perth in 1947, he acted for the Bulgarians from 1966 and for the Russians from 1973.

Codenamed ‘Oscar’, Stevenson was outed by a defector in the 1980s and whisked to safety in the USSR. He may still be living in Russia.

Little is known of his musical activities except that he was a professional violinist who commissioned a work from an Australian composer, with funds from the Australia Council. Do any of our readers remember him?

Dame Katherine Ollerenshaw, a former lord mayor of Manchester, was the driving force behind the creation of the Royal Northern College of Music.

Katherine (pictured left) was no mere politician. Deaf from the age of eight, she read maths at Cambridge (rare for a woman in the 1930s) and did formative work on critical lattices and magic squares. She gained her DPhil in 1945 without having to write a thesis.

From 1956 to 1981 she was a Conservative member of Manchester City Council, driving through the creation of what became the Royal Northern College of Music. She was its chair for 18 years, from 1968 to 1986.

Shocking scenes from the Theatre Museum in Athens, which has been shut for lack of funds and is in danger of a roof collapse.

A model of the dressing room of the greatest Greek singer that ever lived has been abandoned to vermin, termites and damp.

Nobody is doing anything about it. Greece is a poor curator of its heritage.

This is Flemish Opera’s placard for Strauss’s Elektra, opening September 9.

Doncha just love that Fanta can? So artistically placed.

The director is David Bösch. Casting by Miu-Miu.

Maxim Gershunoff, the veteran New York manager and presenter, reflects on Peter Gelb’s early career. We cannot vouch for the pinpoint accuracy of every last detail, but the general picture is correct. Mr Gershunoff was writing in response to a New York Times soft-soap piece on  the Metropolitan Opera manager.

As a 90 year-old, and former VP in the offices of the late, great impresario, Sol Hurok who used and risked his own funds for his dreams of presentation, may I submit herewith a bit of history relevant to your remarks re Peter Gelb.

Peter Gelb got his first job as an office boy through Martin Feinstein. As the head of the publicity department for Hurok, Feinstein, granting a favor, happily obliged Arthur Gelb, Managing Editor of The New York Times back then, and gave Gelb’s boy a job in the publicity office.

Shortly after, Hurok Concerts, Inc. was sold to General Electric. The major innovation GE would bring to its newly purchased subsidiary would be the televising of a prestigious Hurok subscription concert series to movie houses throughout the country. Technological problems prevailed and the project was abandoned. With technology having advanced in over three decades, Peter Gelb recalled what might have been and, although not his original concept, revived the idea for the Metropolitan Opera.

Gelb went from the Hurok office to work as a publicity account functionary at Gurtman and Murtha, publicists and artists managers. Peter’s godfather, legendary pianist Vladimir Horowitz, came along for the ride to Gurtman and Murtha. Peter Gelb’s career path was quite liberally and literally strewn with the softening effect of rose petals.

He next was elevated to directing publicity at the Boston Symphony Orchestra at the fortuitous time of its highly publicized visit to China. Some time in the ’70s, Ronald Wilford, President of Columbia Artists Management, Inc. was glad to employ young Gelb in CAMI’s office, surely pleasing Gelb père once again.

After that position, Gelb went on to SONY Records and when it looked like he was about to lose that job, the Gelb family friend Beverly Sills interceded and promoted Gelb with the Metropolitan Opera Board of Directors. Hired as Managing Director with the responsibility of artistic direction, as well, Peter Gelb has been less than cautious, if not ignorant, of his fiduciary obligations, relying too heavily on large scale donations to bail him out of budgeting problems.

At this juncture, needing a scapegoat he points his bookkeeping problems to the costs of the unions failing to admit to his own ineptitude in dealing with the Met’s multi-million annual costs. Still further, as a manager without prior experience, he proves incapable of negotiating with the unions in question; first threatening a lockout of all the Met’s union employees. Now, finally, he looks to the intercession of a Federal mediator to function as the Met’s manager and jump start a beginning to perhaps the end of his current problems which he alone created. In the immortal words of Chester A. Riley: “What a revolting development this is.”