Westerkamp, who is 100 years old, taught Ingrid Fliter and Federico Lechner, among others.

Dùo Isas-Kwiek, who took this beautiful picture, write: We were rather late and Westerkamp received us in bed with joy and intelligence as always. I share with you a photograph that allowed me to take that moment!

At the very moment the Met announced a new lockout deadline to its musicians and stage staff, the house changed its Facebook header to this:

Does anyone in that concrete bureaucracy talk to one another? Does it make any sense at all to urge people to buy tickets just as you are announcing the possibility of season cancellation? Is there anyone at home? Anyone?

Apparently the negotiations are making progress. Peter Gelb has announced there must be a deal by August 17, or he locks the place up and throws away the key. No change in his tune, then.

New York, NY–Monday, August 11, 2014–The U.S. Federal Mediation and Conciliation Service (FMCS), announced today that the report of the independent analyst brought in to review the Metropolitan Opera’s finances was nearing its completion. Negotiations between the Met and the musicians (Local 802 of the American Federation of Musicians) and the chorus and other members of the American Guild of Musical Artists (AGMA) will resume later this week. Although the Met Management has announced a deadline for Sunday, August 17, after which, if there is no agreement, they will lock out the musicians, craftspeople and choristers, it is Local 802 and AGMA’s intention to continue to bargain in good faith until an agreement can be reached by both sides.

Lyndon Terracini has announced his new season and it’s not a bad mix.

The veteran Elijah Moshinsky will return after a long absence to direct Verdi’s Don Carlos, seldom seen down under. David McVicar is back with a new Marriage of Figaro and his Covent Garden production of Gounod’s Faust, starring hot tenor Michael Fabiano. Aida will be done on the outdoor Sydney Harbour stage. All good stuff.

The eyebrows rise a little at Terracini’s operatic staging of Cole Porter’s musical Anything Goes, and a little higher at a brave new opera by Kate Miller-Heidke, called The Rabbits. Ms Miller Heidke, who will appear in her own opera, is mostly a pop singer. Rabbits belong mostly in Bugs Bunny.

All it takes is the will (and the wealth).

This is Laura Wright, mezzo-soprano, promoted to the tabloid press as ‘the Queen’s favourite opera singer’. (Sorry, Kiri.)

This is Laura, too, stripped and ready for video action. The pictures are from her new exercise video.

The things one has to do to get a chance to sing.

VK, founded in 2006, allows users to upload music and videos, among other social-media functions. It has 88 million members in Russia and a further 55 million abroad.

A judge in St Petersburg is seeking to clarify whether the labels are acting together or separately before the case can be allowed to proceed.

You wonder why Facebook hasn’t sued VK for theft and plagiarism. Spot the differences, if any.

In addition to the insurance firm, the car maker, the watch, the pen and whatever else, Lang Lang has added Harman ‘ the premium global audio and infotainment group’ to his portfolio.

Soon, he’ll be raking in so much he’ll be able to stop playing. 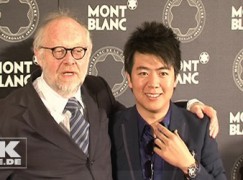 STAMFORD, Conn.–(BUSINESS WIRE)– HARMAN, the premium global audio and infotainment group (NYSE:HAR), announced at an event in Shanghai on August 7 that international piano superstar and United Nations Messenger of Peace Lang Lang will serve as a Global Brand Ambassador for HARMAN audio brands.

Lang Lang is a concert pianist, recognized the world over for the emotion and energy he brings to the stage. Each of his albums has entered the top classical charts as well as many pop charts around the globe. As one of the world’s most prolific and highest-profile recording artists, Lang Lang has headlined the biggest events and most popular venues around the world, and shared the stage with artists of all genres, from Placido Domingo to Metallica.

HARMAN and Lang Lang will launch global marketing and brand awareness programs for HARMAN’s portfolio of consumer and professional audio products in the coming months.

“Lang Lang is an incredibly talented and influential artist who transcends geography and ages to inspire millions of people around the world to enjoy and participate in music,” said Dinesh C. Paliwal, Chairman, President and Chief Executive Officer of HARMAN. “Lang Lang shares HARMAN’s passion for harnessing the power of people and technology to enhance the way artists make music and expand the ways people can enjoy it. Through his unparalleled live performances and prolific efforts to encourage 40 million children in China to play the piano, Lang Lang is an impressive ambassador for HARMAN’s brands, and we are excited and proud to welcome him to the HARMAN family.”

Roger Frisch had a tremor. Surgeons said they could correct it, provided he carried on playing while they worked on his brain. Here’s how.

The West-Eastern Diwan orchestra has thrown an outdoor free Vivaldi concert into its Argentine tour.

The conductor said: ‘The West-Eastern Divan Orchestra is very sensitive to the situation in Middle East. The musicians have relatives on both sides, the sides that are killing each other and, despite this cruel war, there is no Arab or Israeli musician who has canceled his participation in this concert for peace. This is also a gesture to Argentina.’

In enjoying and reviewing Leon Fleisher’s 85th birthday release – it’s my album of the week on sinfinimusic.com – I mulled a good deal over a fugue by Bach that was transcribed for the left hand by Johannes Brahms.

Does anyone know why? Or for whom?