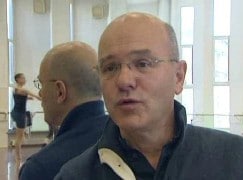 Bertrand d’At was due to get married his weekend.

A protégé of Maurice Béjart, he danced and made ballets for the master’s company before branching out on his own, with a special interest in Chinese culture. His most eye-catching work was A Sign of Love, a blues fantasy set in Shanghai.

He moved to Sweden in the 1990s to direct the Cullberg Ballet, and went on to lead the Ballet du Rhin from 1997.

D’At, who was 57, was found dead in his Paris apartment. No cause has yet been disclosed.

« Video to die for: John Lennon duets with the greatest living violinist