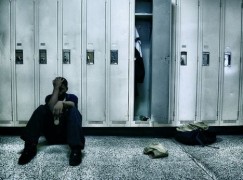 On TV soon: Addicts in the symphony orchestra

Channel 4 has made a voyeuristic documentary. Press release below.

The highly respectable world of classical musicians is rarely linked to addictive behaviour. In this uplifting one-off documentary, the composer and musician James McConnel examines music’s extraordinary transformative power, as he unites ten classical musicians whose lives have all been blighted by addiction, in an orchestra for a spectacular one-off performance with the London Symphony Orchestra.

In 2011, James’s son Freddy, an aspiring and talented musician, died of a heroin overdose. He was 18 years old.

Blessed from an early age with an inquisitive and brilliant mind, Freddy was assessed as a ‘gifted’ child at 6 with an IQ of 144. He won school scholarships, competed on Junior Mastermind and became a member of Mensa but it was in music that he found his true passion. Even as he slipped further into the drug dependency which would claim his life, music was his constant. His father, himself a recovering alcoholic, encouraged Freddy to keep up with his music as he recognised its restorative powers. Sadly for Freddy, it was not enough.

This original documentary is guided by James’ determination to save others like Freddy from a similar fate.

As he follows the extraordinary personal journey of each member of the orchestra through to the nerve-wracking climax of the final performance, James reveals their daily battles as they struggle against the grip of their addiction. From Rachael whose career as an award-winning cellist was nearly destroyed by her drink and drug problem to Andy whose heroin addiction has had a devastating effect on his relationship with his daughter Lea, each musician is pinning their hopes on recovering their love of music and, more significantly, retrieving a trust and pride in themselves.

Paul Rissmann and members of the London Symphony Orchestra (Belinda McFarlane and Matthew Gibson) worked intensively with the group, alongside James to rehearse and compose a new piece to be premiered as part of the performance.

James McConnel: “Addicts’ Symphony is one of those rare programmes which is not only entertaining and informative, but which has done some real, long-term good. For all the participants it was a fascinating experience, but for some it has been truly life-changing. For me, watching a group of people brave enough to address their addictions and fear – through music – was both humbling and inspirational”.

The film will air on Channel 4 in August.

A Glyndebourne conductor has died »