Eleonore Büning, the doyenne music critic of the Frankfurter Allgemeine Zeitung, has blasted Bayreuth with a shock discovery.

For the first time, there are empty spaces in the Festspielhaus. It’s not just Chancellor Angela Merkel who is staying away this year. So are many others who scored (and paid for) a ticket in the online lottery – and then didn’t bother to show up. Tickets can be found on the web. 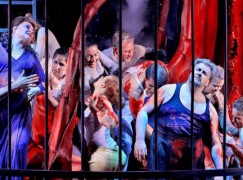