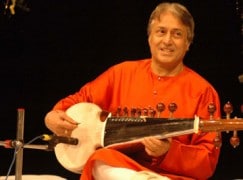 Sarod virtuoso Ustad Amjad Ali Khan flew first-class British Airways back to Delhi with his wife on Saturday night after playing at Dartington.

On arrival, he waited more than four hours for his sarod before being told it would probably turn up on the next flight.

Two days later he posted on Facebook: ‘After damaging my Sarod in 1997, British Airways now misplaces my Sarod. 48 hours and I still wait anxiously for some news. Still not traced!!!’

A few hours ago, the maestro tweeted: ‘Epic Reunion!!! BA delivers my Sarod. Thank you all for your prayers and love’.