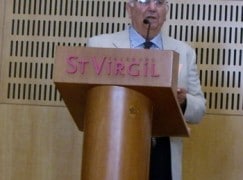 Farewell to the foremost scholar of music among the Jews

We mourn the death today in Jerusalem, aged 85, of Amnon Shiloach, professor of musicology at the Hebrew University and an unrivalled authority on Jewish traditions in music. I had hoped to include him in my recent series on Music and the Jews, but he was sadly unavailable.

He did an immense amount of groundbreaking fieldwork and published a magnum opus, ‘The Theory of Music in Arabic Writings ca.900-1900′.

Other works include: The Musical Tradition of Iraqi Jews,Music Subjects in the Zohar, Text and Indices, Jewish Musical Traditions, The Dimension of Music in Islamic and Jewish Culture, Music in the World of Islam: A Socio-cultural Study.

Away from Jerusalem, he taught at the University of Illinois. Amnon was a paramount teacher who never failed to answer student queries, no matter how dumb. May his rest be sweet, as we say.

When we’re in a care home, what will they sing to us? »