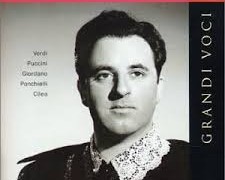 I met the great tenor once, by chance.

It was late in the year 2000, and I was doing a recce of Verdi’s hangouts in the Parma region, ahead of the centennial year of the composer’s death. Late in the day, we drove into Busseto, the little village where he was born.

Not much to see on a misty November afternoon and nowhere to hang out. The cafe was open and a small knot of seniors were clustered around a table. One of them waved an arm, calling us over. Where from? London. What doing? Verdi pilgrimage. Why? Newspaper article. Big, beaming smile.

‘I am Carlo Bergonzi,’ announced the legend, ordering coffees all round.

He could not stay more than a few minutes as there was a pupil waiting for a lesson, but in those few minutes he offered reminiscences, requested updates on the state of Covent Garden and volunteered a few pearls of vocal wisdom.

« Gelb to musicians: you can’t count