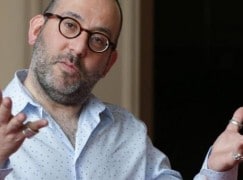 During the catastrophic stage glitch that forced her to clear the Festpielhaus 20 minutes into opening night, Katharina Wagner sought to placate the media with details of her next few seasons.

2016 The director Jonathan Meese, who has faced criminal charges for incitement, has pledged not to introduce Nazi symbols in Parsifal.

2017 Barrie Kosky, director of Berlin’s Komische Opera, will stage Meistersinger. He’s ambivalent about Bayreuth but says ‘there’s no escaping Wagner’. Kosky is thought to be the first Aussie to direct on the Green Hill (a breakthrough oddly unreported by Aussie  media)

There you have it. No more surprises.

The Asian boy who won an adult violin competition »