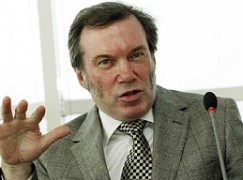 Welsh National Opera’s Chief Executive and Artistic Director, David Pountney, has been awarded the Austrian Cross of Honour for Science and Art, First Class. He was presented the award by the President of the Republic Heinz Fisher in a ceremony which took place in the opening of the Bregenz Festival.

The award honours Austrians and foreign leading figures who have “distinguished themselves and earned general acclaim through especially superior creative and commendable services in the areas of the sciences or the arts” and is conferred by the Federal President.

This year marks David Pountney’s last year as Artistic Director of the Bregenz Festival, a position he has held since 2004.

David Pountney says, “It is a great honour to be recognised by a State which has such an astoundingly rich cultural inheritance. I have worked on various Austrian stages from the Wiener Staatsoper to Linz whose new opera house opened with my production of Philip Glass’s new opera “Spüren der Verirrten” last year, but my main focus has been on the Bregenz Festival where I made my debut in 1989, and have enjoyed 10 marvellous years as Intendant since 2004.”

David Pountney has already been made a Commander of the British Empire and a Chevalier in the French Ordre des Arts et Lettres and was last year presented with the Cavalier’s Cross of the Order of Merit for his contribution to the promotion of Polish culture.

« Breaking: US chamber orchestra shuts down

What’s wrong with this classical audience? »