Ron Cohen Mann left New York for Montreal to spend the summer with a local orchestra. He tells Slipped Disc:

‘I had just played a concert with L’Orchestre de la Francophonie at Place des Arts in Montreal and was having a snack at the Café when I noticed that my backpack with my oboe was no longer at my side. I was in shock.’

The oboe is a Lorée Royal 125 oboe (grenadilla with gold-plated posts and reedwell, silver keys and rods) serial number SM73, with reeds, tools, music, and iPad.

It was taken between 16h25-17h10 on 27 July at the Café and Crêpes, Quartier des spectacles, Montreal, Canada.

If you have information, please email: contact@oboeron.com

A day and a bit before deadline, the Met weakened. After one union, Agma, proposed a less confrontational form of bargaining, the Met suggested calling in the the Federal Mediation and Conciliation Service – provided other unions join in.

Mediation would get both sides off the hook and save Gelb’s career from the legacy of a lockout. This is the first good news from the Met for months. 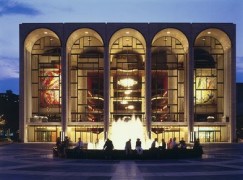 This is the Teatro Lirico di Cagliari that has been making all the headlines about using Google Glass in a one-off Turandot in Sardinia. We’ve never seen them on stage, but they look pretty fit – and sound pretty good – on the beach.

The ‘Molitor’ Stradivarius, which has been played in the past by Elmar Oliveira and Anne-Akiko Meyers is being loaned by present owner Maxim Viktorov to the Luxembourg-based virtuoso, Alena Baeva. She gets to play it for a year.

Viktorov has a collection of ten instruments which include the so-called ‘Ex-Paganini’ violin by Carlo Bergonzi and the ‘Ex-Vieuxtemps’ violin by Guarneri del Gesu. (source: Ingles & Hayday). 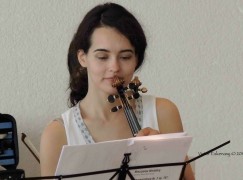 The soprano Latonia Moore, who sang a stupendous last-minute Met Aida in 2012, has announced she’s getting married in a fortnight, and that she’s starting a family. The whole opera world is thrilled for her.

Latonia was due to reprise Aida in New York at Christmas, but that now seems unlikely – even if the Met is up and running by then.

UPDATE: Message to Slipped Disc from Latonia: ‘Who says I’m not singing my Aida performances!? Do you know when I’m due, sir? Exactly.’

The maestro’s latest thoughts on the Middle East (auf Deutsch).

The church organ of the  Marktkirche in Wiesbaden has been severely damaged by a lightning strike. Built in 1863, the organ was played by the composer Max Reger and the humanitarian Albert Schweizer, both of whom lived in the town.

And for those who believe it never happens, this is the second time lightning has struck the church in the past four years.

The Met manager will have breakfasted with a smile this morning over Maureen Dowd’s mini-profile in the New York Times. The doyenne columnist, a Times protegée of his father’s, wrote fondly, almost maternally, of the embattled opera manager.

Peter Gelb will have stopped reading before he got to any critical comment. As a former PR man, he mistrusts journalists and never believes hat he reads unless it is totally fawning.

Nor does his listen to his own PR advisers, making one blunder after another in his public utterances these past few weeks.

What Peter Gelb believes in is Peter Gelb. And that faith is about to be sorely tested.

Unless he can reach some form of agreement with the unions in the next 36 hours – a prospect as remove as an Israel-Hamas love-in – Peter Gelb will lock all unions members out of the Metropolitan Opera and shut it down for the forseeable future.

The outlook beyond that does not look good for Gelb. If the unions force him to climb down after weeks or months of shutdown, he’s finished. If he manages to bring them to heel, the Met that he will manage after the lockout will be – like the Minnesota Orchestra – a restive, unhappy company that will only be appeased – as in Minnesota – by the blood of its manager.

Either way, Peter Gelb will be toast. He has 36 hours to get himself out of the open fire.

We were quick to applaud when Nicole Benedetti’s new album broke into the UK pop charts, the first classical violinist to do so in two decades.

The content we found less encouraging. Homecoming: A Scottish Fantasy is a blend of Bruch and Robbie Burns. It sounds pretty good. What it fails to do is come down one side or the other in the Scottish independence debate. And that’s a fatal weakness in the concept. 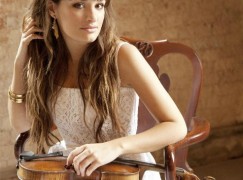 Igor Krutoy, a Russian-Ukrainian composer, has leaped to the aid of a hard-pressed Baltic house. Rejected as a student by the Kirov conservatoire, Krutoy made his living as a songwriter in Moscow, did a course of studies in Saratov and wound up as head of a music conglomerate, Music1.ru.

In 2011, he was reported to have broken the sales record for a New York condominium, paying $48 million for a 12th floor unit at the former Plaza Hotel.

John W. Mazzola, who ran the Center for 15 years effectively as its second president, has died at 88.

A lawyer, Mazzola resigned in 1982 after being found to have used company credit cards to pay $18,000 in personal costs.

The ARD music competition, Germany’s most prestigious, has been overwhelmed this year with 519 applications, whittled down to 312.

The largest number of participants comes from South Korea, followed by Germany, Japan, Russia, France, Spain, USA, China and Poland. The competition kicks off in Munich on September 1. Total prize money is 165,000 Euros, along with priceless exposure on German TV.

The ARD’s most celebrated winner is the now-retired baritone, Thomas Quasthoff.