Rafael Frühbeck de Burgos, the most successful Spanish conductor of the past century – perhaps of all time – died last night in Pamplona. He was 80 years old and had been suffering from cancer. Last week, he announced his retirement.

Of Austro-German parentage, Frühbeeck was a favourite of General Franco’s (as was the present King) and was known early on as the Caudillo’s Maestro.  A law student, he learned to conduct military bands while serving in the Spanish Army.

He proved his worth as music director with such diverse orchestras as Berlin Radio, Montreal, Vienna Symphony, Yomiuri Nippon and, latterly, Danish National. He was a much esteemed guest conductor of many US and European orchestras. He made many recordings for various labels.

Discreet, well organised and unpolitical, he was never easy to pin down. ‘You have to be very careful, nice, inspiring, ‘ he told Hilary Hahn (below). 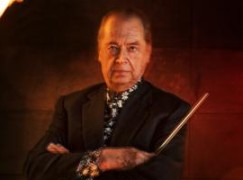 Burni on Gurney: He was mad before the War »