Riccardo Muti: Chicago has displaced Vienna in my heart

Talking to Andrew Patner, the maestro says Italy will always be his first home. Vienna, for the past 44 years, was the second. But now he feels so comfortable in Chicago that he considers it his second home. ‘I have almost the impression I have been born here,’ he says. ‘The people are very much like the people in the south of Italy. They can laugh, they can smile…’ 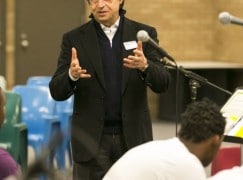