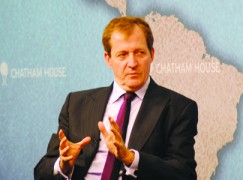 PRs are ‘the nearest thing to prostitutes in public life’

Nick Cohen, in the new issue of Standpoint, lays into the spinners and manipulators that blight his life as a political commentator:

Press officers have no concern with truth. It is not that all of them lie — although many do — rather that truth and falsity are irrelevant to their work. Their sole concern is to defend their employers’ interests.

He’s right, up to a point. In the music world, where PR is no less end-oriented, lies don’t have legs. They may have a pair of high heels, but they don’t last long without getting exposed by the reality of high performance. PRs who lie don’t last long.

PRs who bully and bribe may thrive at the lower levels of the food chain, but serious writers avoid them as pestilence, ignore their emails and slam the phones down on their interns. (Twice this week, as a matter of fact.)

The best PRs are the ones you’ve never head of. The best I’ve ever known had three great churches competing for his funeral service when he died, so much had he done for them on the quiet.

So I can’t agree with Nick. I never condemn any profession in its totality, especially prostitutes. There are always good individuals on the job. That said, in Nick’s neck of the woods, British politics has never harboured a muckier pond of turds.

Violin stolen on camera is found in Utah »