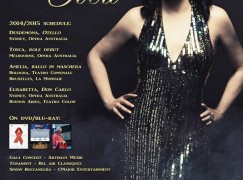 La Monnaie Opera in Brussels has cancelled next seasons contract with Tamar Iveri, a Georgian soprano who is accused of making extreme homophobic comments on her Facebook page. She was to have sung there in Ballo in Maschera. Monnaie intendant Peter Caluwé notified a Dutch website that he dropped her and confirmed the sacking to slippedisc.com.

Opera Australia, where Ms Iveri is due to sing Desdemona in Verdi’s Otello in two weeks time, is resisting social pressure to replace her, saying she has apologised for remarks published in her name.

It issued a statement saying: ‘Opera Australia has become aware in the past 24 hours, of the media and social media coverage of comments reported to have been made by soprano Tamar Iveri … Tamar Iveri has sought to clarify her views on this important issue, and has issued an apology and explanation on her own Facebook page … Rehearsals and performances at Opera Australia are continuing as planned.’

Ms Iveri has sought to dissociate herself from the published remakrs, saying they were issued by her husband without her knowledge.

Here’s what she writes on her Fb page:

I am shocked and saddened by the reports in the internet and in the Australian media calling me a homophobic.

For my entire career I have been working with gay people and some of them are very dear friends. All of them can confirm that I never lost a word that might associate me with homophobic ideas. I respect every single human being and I am against all kind of descrimination and violence.

Please let me explain what lead to the recent articles that you might have read:

On the 17th of May 2013 a gay parade was supposed to pass directly in the yard of an Orthodox Church in Tiflis. At the same place and for the same date a commemoration for Georgian soldiers killed in Afghanistan had been announced. For that reason and because Georgia is a country where 90% of the population are deeply religious, conservative Orthodox Christians I wanted to express my sincere doubts that a parade made sense under these circumstances, in the yard of an Orthodox church. I was worried that this would provoke people and lead to violence. Unfortunately this is what happened then.

Besides myself my husband was using my Facebook account at that time and he is a very religious man with a tough attitude towards gay people. He copied my text, changed it considerably and posted it under my name. You might imagine that I was not happy with that at all and I immediately deleted it when I saw the text about half an hour later. This text does not express my own opinion. I’m afraid it was too late and the text was already spreading in the internet.

I explained the situation and officially apologized to the LGBT community in Georgia a year ago and they accepted my apology.

I would also like to point out that it was not Paris Opera that cancelled my recital on the 1st of June 2013 as stated in some of the articles, but that I had to cancel it due to a indisposition.

Furthermore I never wrote an official letter to the Georgian president on this matter, it was a Facebook post that was copied and used for the article a year ago.

« Cellist asks audience to play along. More than 100 respond.