The new Auditorium del Parco in L’Aquila, Italy designed by Renzo Piano, was envisaged as a musical instrument that possessed the piano and forte qualities of the finest concert grand.

So who would get to play it first? The soloist on opening night was a rising young talent, Gloria Campaner, playing works by Rihm, Widmann, Illés and Schumann. Watch. 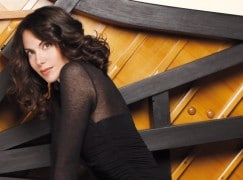