A survey by the Department of Culture, Media and Sport shows that only 6.7 percent of jobs in the Music, Performing and Visual Arts Industries are held by people of on-white origin.

According to the 2011 Census, around 11 percent of the UK population are non-white. The gap appears to be closing, slowly.

Orchestras, as ever, slower than most. 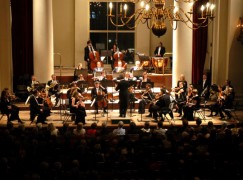