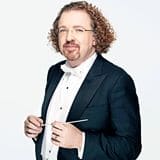 The Brussels Philharmonic has appointed Stéphane Denève as its next Chief Conductor and inaugural Director of the new Centre for Future Orchestral Repertoire (Cffor). The French conductor, who succeeds Michel Tabachnik in September 2015, was chosen for the post to help realise the innovative and pioneering Orchestra’s ambitious artistic strategy. The Centre for Future Orchestral Repertoire, meanwhile, is set to create an extensive online database, which will be a global platform for the Brussels Philharmonic’s ground-breaking enterprise to promote the finest 21st-century orchestral compositions to repertoire status. Cffor will gather key information about symphonic works created since 2000 and begin the great debate about those compositions most likely to endure for decades to come.

Stéphane Denève made his debut with the Brussels Philharmonic in November 2013, performing works by Gershwin, Roussel and Shostakovich. “The experience exceeded all my expectations: the talent, the dedication, the good mood and open-minded spirit offered by the musicians during our rehearsals were totally inspiring. The passion, generosity and enthusiasm shared during our first concert together made a strong impression on me. The warm audiences, and also the modernity, boldness and flexibility of the whole institution and its management, helped me to foresee an extremely fulfilling and exciting collaboration. And this, in turn, allowed me to imagine an ambitious and innovative artistic project.”

Denève’s subsequent discussions with the Orchestra’s General Manager, Gunther Broucke, prepared the ground for Cffor’s creation and for his appointment as Chief Conductor. “I was so excited by Gunther’s creative mind and positive outlook when we first met that I gladly accepted his invitation to work with the Orchestra last year,” the conductor recalls.

A Meeting of Minds

Denève found a close ally in Gunther Broucke. Both men expressed concerns about today’s orchestral repertoire, its increasing dependence on a narrow stream of works from the past, and the urgent need to introduce audiences worldwide to the present century’s best symphonic compositions. The idea for Cffor arose during their early meetings and influenced Denève’s decision to join the Brussels Philharmonic’s artistic adventure. “I believe the stars are in perfect alignment for this project,” he comments. “The Brussels Philharmonic is a fine orchestra with an excellent manager. There has been a ‘buzz’ in the news about the orchestra’s work in recent years, thanks not least to its innovative programming and successful touring with Michel Tabachnik and because of its soundtrack recordings for movies like the Academy Award winner The Artist.” He believes that Brussels, with its strong cultural life and place at the heart of European affairs, offers an ideal base for the revitalisation of orchestral programming…

« Violin stolen on camera is found in Utah