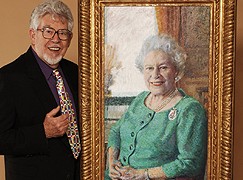 How well did the BBC know Rolf Harris?

A dozen years ago, the Australian entertainer was teaching art on BBC1 at prime time and painting Her Majesty the Queen in his spare time.

When some of us in the critical professions challenged the promotion of this rank amateur to the status of Artist Laureate, we were told by BBC controllers – one, in particular – that he was a national treasure, above art criticism, a great educator of adults and children.

This was long before the exposure of Jimmy Savile. Long before women came forward to say they had been abused in childhood by Harris.

We write now with the benefit of hindsight. But, just as BBC executives came forward in the Savile case to say they had privately found him ‘creepy’, were there similar misgivings about Harris? If so, were they suppressed? And why?

A TV makeup artist said they called him ‘the octopus’, for his wandering hands.

The questions need to be asked.

« Zubin Mehta is honoured in Istanbul

Exclusive: A Schubert portrait fades before our eyes »