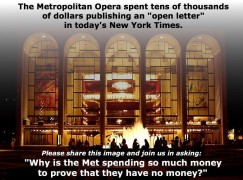 How Met musicians are leaving Gelb for dead

The current pay negotiations between the Metropolitan Opera and its musicians are like no previous round.

What in the past was a mud-wrestling bout between professional union officials and opera house management with occasional nods to print media, is now a social media war which the musicians are winning hands down.

Some months ago the musicians set up their own website – not the usual grievance-laden page but a genuinely active and reflective site that gives video insight into their lives, art and work. The site and its blogs have drawn global attention because the content is genuinely interesting.

In addition, the musicians themselves – not local 802 – have set up a rapid response operation to rebut arguments and misinformation going out from Gelb’s office to the mass media. The unit is quick, slick and to the point.

Nothing the Met issues gets past its eagle eye. Every Gelb attempt to seize the public initiative is thwarted by musicians who are more clued up to the mechanics of the modern world. Not unlike events in Iraq, this is an uneven fight which is being won by light-footed combatants against a big, bogged-down machine. Gelb’s Met looks like yesterday’s army.