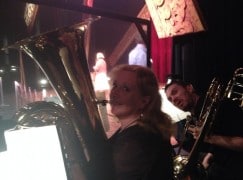 How I lost a lung and gained an orchestra

Susan Bradley plays in an orchestra.

She didn’t start until she’d undergone surgery for lung cancer.

The operation changed her life. The surgeon was a musician. He persuaded her to join his orchestra.

We asked Sue to tell us more:

Just what creates the connection between music and medicine? Why are so many medicos also good musicians? Is it the ability to do detailed study? The talent for time management? Or is there a complementary aspect – the stark, controlled, discipline of the practice of medicine versus the catharsis that comes from music performance?If there’s an orchestra that can answer these questions, it’s Corpus Medicorum, a Melbourne, Australia based symphony orchestra, currently preparing to take their 2014 programme, To Russia With Love, to Melbourne’s sister city St. Petersburg, for medical and musical exchange. The doctors and nurses will spend a few days in rehearsal, a day of medical consultation with their Russian counterparts, and give twoperformances: one formal concert, and a charity gala ball.The orchestra grew out of the Australian Doctors’ Orchestra, initially as a string ensemble, evolving into a chamber group, and about seven years ago took the plunge into the larger symphonic repertoire. The current personnel are mostly medicos, plus a couple of lawyers, and the odd professional musician to fill in the gaps..

One such gap was filled by a most unusual audition: freelance Melburnian tuba player Susan Bradley was diagnosed with an aggressive form of non-smoking lung cancer in early 2010 and was operated on by the founder of the orchestra, violist Phillip Antippa, a leading Melbourne cardio-thoracic surgeon, losing a lung. She promptly found herself playing in the orchestra – highly effective post-operative physiotherapy, but a tough audition process, especially for a tuba player!In Australia the orchestra raises funds for Lung Cancer Services at The Royal Melbourne Hospital; in Russia they will be raising funds for Russian cancer charity AdVita.Come and support us in St Petersburg: June 24 at the State Academic Cappella Hall, playing Rimsky-KorsakovCapriccio Espagnol, Tchaikovsky Violin Concerto with soloist Mikhail Gantvarg,Head of the St Petersburg Conservatorium, a new piece Suspended by Australiancomposer Iain Grandage, and Dvorak Symphony no 9, conducted by Keith Crellin.June 25 Charity Gala Ball in the Rose Pavilion of the Pavlovsk Palace, withmusic of J. Strauss and Shostakovich.Find us on Facebook, and check out the website for more information!http://www.corpusmedicorum.org.au/