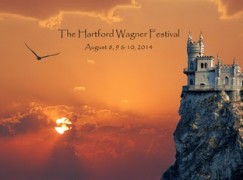 Not sure whether to laugh hysterically, or weep.

A man called Charles M. Goldstein is trying to raise money for a Ring cycle in Hartford, Connecticut. It’s an economy Ring with a digital orchestra. Says Goldstein:  My digital instruments come from the Vienna Symphonic Library and are basically from the players of the Vienna Philharmonic and other Viennese orchestras.’

In whose dreams? Listen to this clip. If you think it sounds like Vienna, check in with the nearest ENT specialist.

Hartford Wagner Festival, Inc.- Newest Opera Company to Present Wagner’s Ring CycleThe Hartford Wagner Festival, Inc. is pleased to announce its inaugural season of presenting Richard Wagner’s monumental “Der Ring des Nibelungen” with their new production of “Das Rheingold” on August 8, 9 & 10, 2014 at the Roberts Theater of the Kingswood Oxford School in West Hartford, Connecticut.Utilizing a state-of-the-art Digital Orchestra, “Das Rheingold” will be the first production of the “Ring” of the new opera company. Following each year, the Hartford Wagner Festival will add the next installment of the “Ring” cycle until in 2017 they will begin presenting two complete “Ring” cycles each year.Employing the talents of the Digital Orchestra’s creator, Charles M. Goldstein, the Hartford Wagner Festival has hired Jonathon Field, Head of the Opera Department at Oberlin College and a noted “Ring” Stage Director, to produce an entirely new multi-media production of the “Ring” for HWF. Eight artists from the Metropolitan Opera have been engaged to sing as well as giving young artists the opportunity to perform in some of the smaller roles.Michael Chioldi, noted Metropolitan Opera Baritone, will make his first foray into Wagner as Wotan in “Das Rheingold.” Robert Brubaker will sing the role of Mime which he has sung for the Met. Sondra Kelly, also a Met alumnus, sings the role of Fricka and Adam Herskowitz (another Met artist) will sing Froh. Alberich will be sung by Met artist Philip Cokorinos and Cindy Sadler will perform as Erda. Joel Sorenson reprises his Met role of Loge. Newcomers Jeremy Milner (also a Met Artist) and Matthew Anchel sing Fasolt and Fafner with Met artist Ross Crolius as the second cast Fafner. Resident Artist’s Sydney Anderson, Caitlin Mathes and Ema Mitrovic’ will be the Rhinemaidens. Conducting will be Charles M. Goldstein.Full Cast details can be found here.