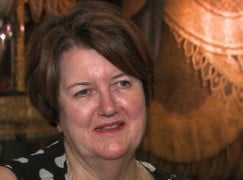 Exclusive: The Met’s #2 joins board of English National Opera

Restless, ambitious and increasingly international, English National Opera has reached out to Sarah Billinghurst, who retires next month after 20 years as assistant general manager for artistic affairs at the Metropolitan Opera – the company’s number 2 in all but name.

Sarah, who is keen to spends more time with her husband, has agreed to become a board member at English National Opera, advising on talent and artistic development. She has a close working relationship with ENO’s artistic director John Berry, developed over several successful co-productions.

‘It seemed a very good thing to do,’ Sarah told slippedisc.com, ‘because I love what John does and we have worked together on quite a few shows. I’ve never had much to do with boards before, so it’s something new. It involves five or six meetings a year, either in person or by phone.’

That may be an under-estimate. Sarah will get called on often to advise on matters great and small. Her recruitment is a considerable coup for a company whose work tends to be appreciated more on the world stage than in domestic media. She’s a big feather in John Berry’s cap.

Aside from ENO, Sarah is also serving on the boards of risen-from-dead Santa Fe Opera and talent-store Juilliard School.