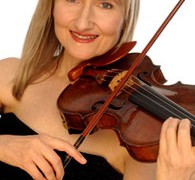 Death of a composer’s friend

The violinist Janet Packer died at the weekend, during a course of cancer treatment. She was 64.

Living in Boston, she launched the Pro Violino Foundation and commissioned works from Gardner Read, Vagn Holmboe, Juan Orrego-Salas, William Thomas McKinley, and Edwin London, all of which she premiered.  She recorded McKinley’s Violin Concerto no. 1 (MMC Records) and a Serenata for violin and small orchestra by Vittorio Rieti (CRI); she also made a premiere recording of works for violin and piano by Charles-Marie Widor (Centaur).

Among recent commissions were a Sonata for unaccompanied violin by Andrew Imbrie, and Imaginary Variations for violin and piano by Krzysztof Meyer, which she performed more than twenty times.

Janet was chair of the violin department at the Longy School of Music.

« To win this piano competition, you need elbows … and feet