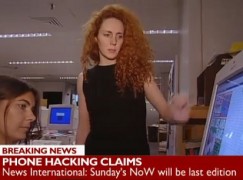 Just in. No resemblance to any living characters, &c.:

GREAT BRITAIN, a new play by Richard Bean, directed by Nicholas Hytner, opens at the Lyttelton Theatre on Monday 30 June, playing until23 August

GREAT BRITAIN, a new play by Richard Bean, directed by Nicholas Hytner, will open at the National’s Lyttelton Theatre on Monday 30 June (which will also be its press night).

Richard Bean’s fast and furious new play is an anarchic satire about the press, the police and the political establishment. Billie Piper plays Paige Britain, ambitious young news editor of The Free Press, a tabloid newspaper locked in a never-ending battle for more readers.

Tickets for the first two weeks of performances (until 12 July) go on sale this morning, with the rest of the run (14 July – 23 August) on public sale from 26 June.