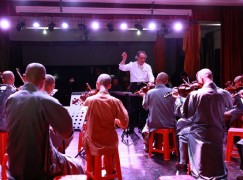 The inauguration of Mount Tiantai Buddhism Music Academy took place on May 6th in Mount Tiantai, a sacred place in Zhejiang province with strong Buddhism tradition that can be traced back 1,400 years ago. Also inaugurated was the 3rd Tiantai Zen-ism Music Festival where an ensemble of string players made its debut on stage. All members of the ensemble are monks and nuns of the Mount Tiantai Temple.

Among those attending were the vice president of Central Conservatory of Music, famed vocalists, violinists and composers, and string professors who helped with the training. All together about 40 monks and nuns played the music of Mozart and Bach overlooked by the giant statue of Buddhas.

It all started when Rev Wuyue, the Buddhist abbot of the Temple and a former violinist graduating from the Wuhan Conservatory of Music before taking the tonsure, visited a cathedral and had his first experience to church music when a priest began to lead the chorister. Wuyue was enormously touched. He was convinced that music should also be the device that carries the teachings of Buddha.

Back in China, he became the first to teach Buddhism by means of music. Now in his 70s, Wuyue believed in music bringing serenity. So he decided to form a first ever Zen band and introduced western musical instruments to Buddhist music. After all, Buddhism was introduced to China from India.

So a band was formed as early as 2008. They took the name of Guangxian Ensemble two years later. Most of its members were born in the 1980s and 1990s and received no musical training. In April 2013, Liang Da’nan, leader of the Beijing Symphony Orchestra and a professor at the Central Conservatory of Music, visited the Temple and began to train the monks and nuns in Beethoven, Bach and Tchaikovsky. They love him and call him Papa Liang.

One of the members is Xiaotong. She was born in 1989. After graduation from high school, she visited the Temple for pleasure but stayed there for good. She began to study violin in 2010, barely able to read a score. Now she is one of the best nun violinists, desired by other temples eager to have their own string ensemble. According to Rev Mr Wuyue, it is his dream to have a Temple orchestra.

Stranger than opera: Stagehands save man from violent mugging »