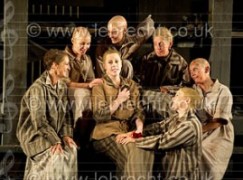 When I first wrote about him in my Companion to 20th Century Music back in 1991, he was so little known that there was no standard spelling of either of his names. I called him Moisei Vainberg. Nowadays his name is more commonly transcribed as Miecyslaw Weinberg, but he remains a mystery to most music lovers despite a slowly rising tide of recognition.

A Polish refugee from the Nazis, Weinberg (1919-1996) was the composer closest to Shostakovich, in both friendship and style. Each would give the other first sight of their new scores. The trust between them was rare in Soviet Russia.

Weinberg’s opera The Passenger has been staged in Bregenz, London and Houston and is coming to Lincoln Center this summer. But a cycle of symphonies announced by a British label appears to have been abandoned. It’s two steps forward, one step back.

This week, however, Weinberg will be BBC Radio 3’s Composer of the Week, assuring him one of the network’s prime showcases. The microsite is down at present. You can listen to Weinberg tomorrow and every day this week at noon.

Rare defeat for Steinway in the Arthur Rubinstein finals »