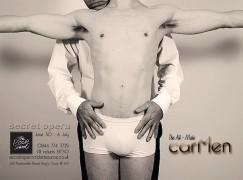 An all-male CarMen is coming our way

Set in the gay community of liberal 1920s Spain, Don José is the central character in this all-male reworking of Bizet’s tragic opera.  Sexually confused and dominated by the strictly religious upbringing imposed by his mother, he has come from the country to Seville to get a glimpse of the young man he has idolised from afar, the dancer, Carmen.

Two simple events change the course of their lives.  Carmen, a hedonistic player, chooses the simple man as his sexual plaything that night.  José falls in love – but Carmen already has his eye on the famous matador, Escamillo..

With pent-up rage and jealousy, he watches as the dancer and the matador flirt before his very eyes.  At that moment, news comes that the one person who can control him, his mother, is near death.

With the shackles of maternal and religious influence removed, there is nothing to prevent Don José from taking what he has always wanted.

With homosexual, religious and psychological themes, this intimate production involving just five singers shows Bizet’s tale of love, passion, jealousy and anger between men.  Performed in the round, with the audience on scene and free to move around the action, Secret Opera will give an unforgettable and heart-rending experience to all.

Sung in English with piano accompaniment by Andrew Charity.  Design by Richard Cooper, costumes by Natalie Lewis, directed by Robin Pietà. The opera is double cast, featuring company regulars alongside new artists for this project.

The performances run from June 30th to July 6th at the Studio Theatre, the Poor School . Internet interest in this unusual production has been high.

« The man who invented Messiah from Scratch