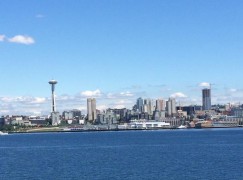 This just in from John Walz. Whey will they ever learn?

Attention All Cellists!!! Alaska Airlines now requires a first class ticket for the cello!! I discovered this early this morning at Burbank Airport when I arrived for my flight to Seattle.

Of course, this stupid rule negated my travel plans (not to mention the already purchased ticket for the cello). They “graciously” offered to hand carry the cello to the baggage hold and when I told them that was not going to happen, I had no choice but to send my cello home with Vince and borrow a cello up there.

My dear friend and colleague, Doug Davis, came to the rescue and I’ll have the honor of playing Sundays concert on his splendid Gagliano!! In the meantime, here’s a beautiful view of the Seattle skyline from the ferry to Port Townsend.

UPDATE: Alaska Airlines have tweeted us this response:

Our policy does not specify that you have to have a first class seat. You can book a 2nd seat in coach for oversize baggage such as your cello.

Tragedy: Juilliard grad jumps to her death on Upper West Side »