A woman to be Master of the Queen’s Musick?

Sir Peter Maxwell Davies, 79, is stepping down due to ill-health and speculation is rife about his successor, to be announced next month.

It’s an establishment decision, recommended by the Great and the Good. Since the Poet Laureate is now the estimable Carol Ann Duffy there are targeted whispers that precedent is about to be broken again by appointing a female composer.

The front-runner, according to gossip, is Judith Weir, 60, opera composer.

The orchestral composer Sally Beamish is also said to be in the running.

No disrespect to these excellent candidates, but why not break the mould still further, Your Maj? Go outside the magic circle to the real world of working composers who grind fingers to the bone writing film and television scores of considerable merit.

Joceylne Pook, for instance, whose work was used by Stanley Kubrick.

Rachel Portman, who has written for Mike Leigh and Jim Henson.

Ilona Sekacz, one of the busiest TV composers.

Or Debbie Wiseman, presently working on the death of Dylan Thomas.

No need to keep it within the upper crust, eh? Get someone who writes tunes and tells stories. 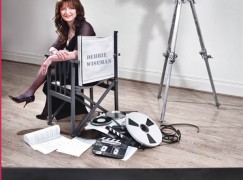